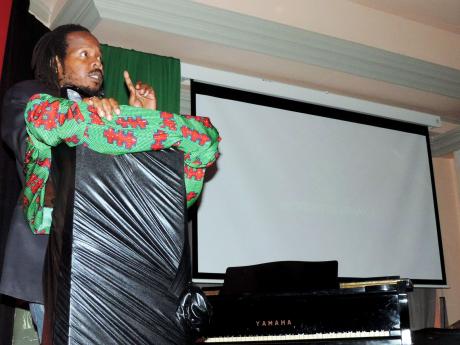 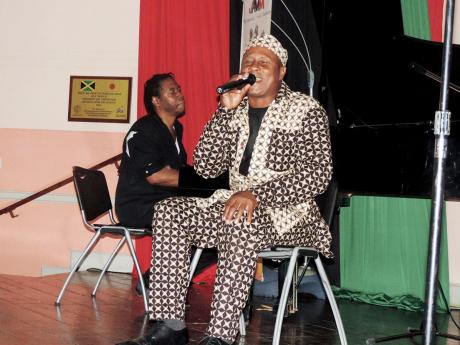 Using audio recordings of Garvey's own words, visuals on big screen and the live performances of Jahiti, Isha Bel and Keith Campbell, Steven Golding presented the strong connection between National Hero the Rt Excellent Marcus Garvey and the performing arts at the Institute of Jamaica, East Street, Kingston, on Sunday afternoon.

Golding, president of the Universal Negro Improvement Association (UNIA), took a chronological approach in speaking about Garvey's influence on youth, poetry and contemporary popular music. In doing so, he spanned various aspects of the performing arts and countries.

After giving the history of Garvey's message to members of his organisation to "keep cool" while he was held at a facility widely known as The Tombs before being sent to prison, Golding had singer/guitarist Jahiti do a musical version of the poem Garvey later developed.

Congratulating Bob Marley on being well read, Golding cited Garvey speeches by date and place from which Marley had utilised material in 'Who The Cap Fits' (where he uses Garvey's "man to man" in the opening line) and 'Redemption Song' (the opening couplet of the second verse often attributed to Marley, who used Garvey's words. Then there is Warrior King's 'Virtuous Woman', in which he references Garvey when he sings "no real man can live without a woman/Like night to day is a woman to her man".

"So Garvey is still making music even to today," Golding said.

Burning Spear was a strong part of his presentation, Golding saying that Garvey was under "tremendous pressure" in the later part of his life and left Jamaica for self-imposed exile. Golding said there was a determination in some quarters to suppress his legacy "and it almost worked. So we have to give thanks to people like Burning Spear".

Roy Rayon started his post-lecture performance with two of the Burning Spear songs about Garvey, 'Marcus Garvey' (Golding had pointed out the Sinead O'Connor version earlier) and 'Old Marcus Garvey'.

He turned to Garvey's own words, sarcastically thanking the USA's Federal Government for Garvey's five years of incarceration, as it was in that time that he produced the poetry referenced extensively during the presentation.

And, in thanking Golding for doing precisely what had been asked of him, director/curator of the Jamaica Music Museum Herbie Miller added a few tracks that are connected to Garvey, among them Max Roach's 'Garvey's Ghost'. On Sunday, February 18, Miller will speak on the influence of Garvey's philosophy and aesthetic on instrumental music.