Reggae songstress Etana qualifies for US$5,000 in tour support 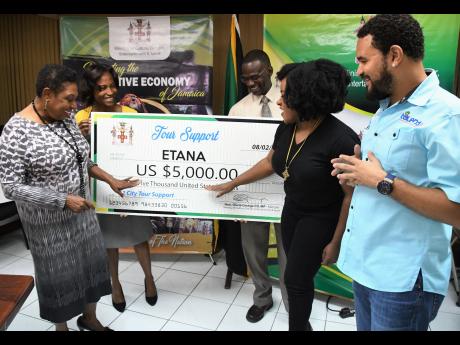 Reggae songstress Etana checks out her US$5,000 cheque 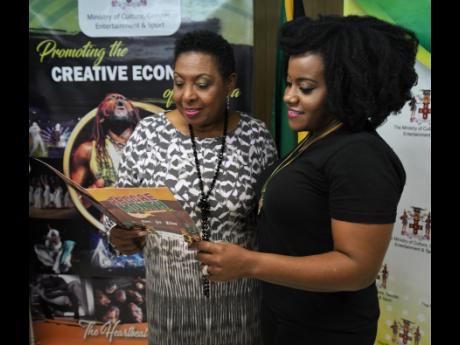 Contributed
Entertainment Minister Olivia Grange (left) and recording artiste Etana check out the calendar of events for Reggae Month, following the symbolic cheque presentation to the entertainer for an upcoming 32-city tour of the United States.
1
2

The Ministry of Gender, Entertainment and Sport has gifted reggae singer Etana with a grant of US$5,000 (J$630,000) to support her 32-city tour of the United States. Some Jamaicans were incensed by the Government's alottment of over half a million dollars to the working musician, but veteran music producer Gussie Clarke argues that it is a form of promotion for Jamaica's culture and music on the world stage.

According to Clarke, the country is spending less than if they were actually going to the country to promote the country as a tourist destination, and that the terms and conditions of the gift carries stipulations, which assure those granted are able to carry Brand Jamaica, and its culture all over the world.

While noting that other entertainers have received the grant before Etana, he is urging mores artiste should apply for tour support fund.

"Other artistes who are touring and structured need to go and apply for some too. It is there for them too," Clarke told The Gleaner.

"It's basically advertising dem advertising the country, the music, and the culture of Jamaica. Any artiste going on tour can apply for it. This money is not actually going into their pockets either. It is set on set and structure, where any artiste going on tour can apply through the ministry no matter how big you are or how small you are," he said.

Clarke also warns that the grant will not be dependent on popularity of the artiste but the degree of the tour. "An issue is that some people claim that they going on tour, but are probably going to one State and 10 different clubs. Many ah dem say dem going on tour but all they are doing is couple shows," Clarke continued.

Despite comments made by Etana during the Trump/Clinton presidential campaign, Clarke believes that as Jamaican recording artiste, the Wrong Address singer should be eligible, once she is meeting the requirements set out by the ministry.

"I don't see the Trump thing being any issue at all, and I think beyond that, she is a good ambassador of our music and as a female, that projects a strong black image. s]So when and where she qualifies within the parameters of the support, she should get it," he told The Gleaner.