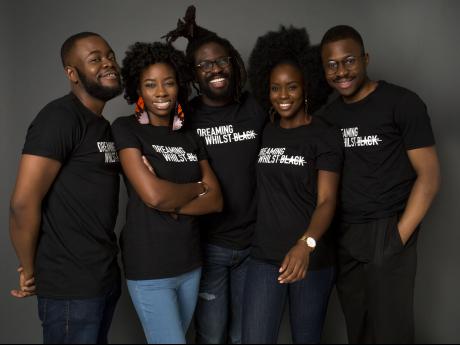 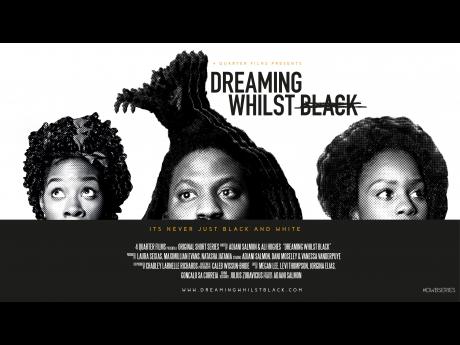 Weaving between art and his own reality, Jamaican filmmaker Adjani Salmon's creative motivations stem from his own experiences. Now based in the UK, Salmon is poised to flex his creative muscles with the upcoming release of Dreaming Whilst Black a nine-episode long, mini-comedy series produced by 4Quarter Films.

There were enormous hurdles for Salmon to jump during production of the series, particularly in finances.

"By far, the most difficult thing to overcome is reconciling the fact that I've spent my mother's deposit for a mortgage on a web series, without her knowledge," the budding filmmaker tells The Sunday Gleaner.

Dreaming Whilst Black is the first full-length fictional production written by Salmon. It presents the story of a young, passionate, yet naive filmmaker, Kwabena (also played by Salmon), who struggles to navigate between his dreams of being a filmmaker and the reality of trying to be one. Kwabena struggles to balance work, friends, and his relationship, and his efforts are compounded by the pressure from his family to gain financial stability.

During this journey, Kwabena has to question himself, 'What am I willing to sacrifice for my dreams?' And, 'are these sacrifices worth it?'

The premise of Dreaming Whilst Black resembles Salmon's own story, as the budding filmmaker confessed his own failures at the start in producing the work, issues that were unwittingly remedied by his mother.

"I have never stopped believing in the project, but at some point, you have to ask yourself, "is this really worth a house?" Salmon quipped.

"At the time when I started shooting the series, her first question was, 'Where you getting the money from?'", Salmon told The Sunday Gleaner.

Salmon had saved up a reasonable amount of money from working in the art department of major film sets and being commissioned by the British Film Institute.

"So I told her not to worry. Then I finished all my savings after shooting two episodes."

Then Salmon came up with another solution.

"My name is on my mother's bank accounts in England, so I can handle anything that needs to be done here for her. I didn't want to stop shooting because I genuinely believed this show would be my breakout project. I figured if I used the money, I could earn it back in time before she'd decide to buy the house."

"That didn't exactly work out because the more I worked, the more the costs of the show would go up. About six months in, my mum told me she found a house that she wanted to buy. So I had to confess and try to convince her that it was a worthy investment to make. She wasn't exactly convinced, but the money had already been spent, so she said, 'this better work out.'"

Dreaming Whilst Black will be one of the first oeuvres of 4Quarter Films.

"My motivation to make films comes from a more basic motivation, which is to tell stories," Salmon said. He revealed other motivations for the project, one being that he grew frustrated at only seeing 'all-white shows' or minority characters being portrayed in crippling poverty or as criminals. This led him to create a different narrative, of a young black man who is just trying to make his way in the world, a portrayal of 'the majority of us'.

Salmon is an award-winning writer-director who graduated from Met Film School. He created and ran a production company focusing on advertisements, public service announcements, and corporate videos.

In 2013, Adjani dissolved his business and moved to the UK to pursue his master's in film directing.

"For us, having a show that portrays diversity is what we are all about since our directors have such diverse backgrounds. We were incredibly lucky to work with amazing talent and a crew that understood that and helped us bring this vision to life," said the director and CEO of 4Quarter Films, Natasha Jatania.