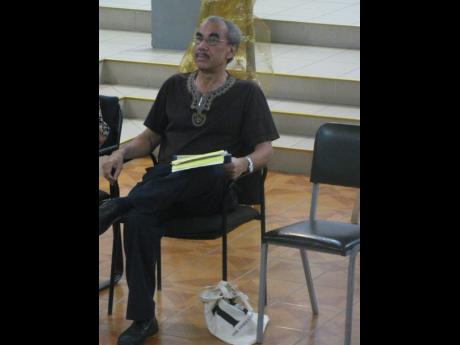 The acknowledgement of one's peers is a complement, and August Morning poet (and painter, as the cover art attests to) St Hope Earl McKenzie's work is repeatedly complemented by the voices of his contemporaries. This is done through their reading his generally short poems, and the trend is towards a connection with the University of the West Indies (UWI), Mona campus. This is not surprising as McKenzie is a former lecturer there.

The voices are credited in alphabetical order of surname, Edward Baugh, Lisa Brown, Michael Bucknor, Karen Carpenter, Michael Anthony Cuffe, Clinton Hutton, Trudy Schoepko McKenzie, Mervyn Morris, Velma Pollard, Jean Small and Audrey Ballentyne Watson - on the rear of the beautifully uncomplicated CD packaging. My one quibble, that the poems are not listed, would have ruined that effect as there is no room for 35 titles. However, an insert could have been considered, although the readers identify themselves.

The poet is also named among the readers, and his brief explanation of the project's purpose may also justify skipping the standard track listing. McKenzie writes: "This CD is a bequest to my family, friends and people who have an interest in my poetry. It is not intended for commercial purposes. I hope it will be listened to in this spirit." You have to have the interest to listen; a can of the titles will not do.

However, this avoidance of commercial purpose does not mean that August Morning stints on quality. Far from it, as McKenzie's extensive publishing history has long established his ability and consistency. To take poems from someone who has the collections The Almond Tree, Against Linearity and A Poet's House (he does thank his publishers as well) and put them in oral record is to add the nuance of the readers, their individual emphasis indicating interpretation and inviting the listener to read more into the work.

This works very well from the opening A Dream in Vancouver, read by Lisa Brown to the title poem from Watson (after an epigraph from Olive Lewin's work), Jean Small's reading of A Coconut Alphabet, Velma Pollard's reading of Jamaica History, Love in The Rain (Michael Anthony Cuffe) Stranger Among the Tombs (Mervyn Morris) and McKenzie having the final word in Wood Smoke. Thematically, it encapsulates much of what has been said in various voices before, including the focus on family, observation of ritual, a sense of community, and understanding from what appears routine and even inconsequential.

It is a fitting bequest, and as much as McKenzie leaves those who would listen with his gift of verse, it is also a tribute to a poet's many years of work by his peers,