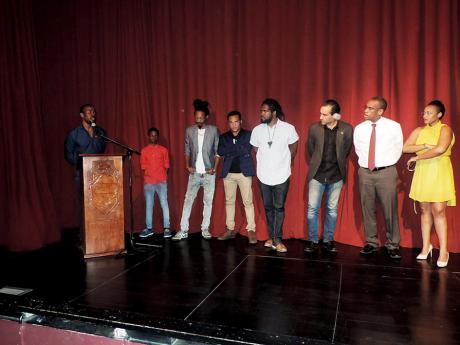 There are tears in the 15 minutes of Kinto, shed by lead actor Sekai Smart-Macaulay, when the really hard times as a windshield washer literally hit him in the form of a group of thugs who rob and beat him in New Kingston, just after he happily buys food with some of his earnings. And there is the bawling of the baby Kinto cradles after he searches a car with the driver Rick (played by Justin Hadeed Awn) slumped over the steering wheel, sleeping - a driver who, in a state of stress, had not given Kinto money earlier in the eventful day.

But there were also briefer waters without the requirements of Kinto director Joshua Paul before Tuesday night's screening at the Philip Sherlock Centre for the Creative Arts, University of the West Indies (UWI), Mona, when co-producer Leslie-Ann McDowell spoke about the person to whose memory the film is dedicated - Kemar James.

Co-producer Saeed Thomas spoke a bit about James, saying that there were expectations that the deceased young man would have developed into "one of the most talented directors of photography that we have seen". Paul added that he was driven to finish Kinto in James' memory, although there were times - such as at his nine-night - that it seemed a big task to finish the film he and James had focused on together. "Kemar James was my best friend," he said, remembering scouting locations like Emancipation Park, New Kingston.

Now that it is done, Kinto has been submitted to a number of film festivals, and accepted for screening by at least two, in Miami, USA, and London England. Plus, Paul added, "we recently got word we have been selected for a festival in Hollywood".

The story was sparked by real-life events, with Paul saying that he was working at the Creative Production and Training Centre (CPTC) and had to go through Liguanea very early in the mornings. That meant encountering windshield washers. He revealed that unlike many others, he actually engaged them. "Just talking to them, I got a lot of stories. One guy said that he did not get to make enough money one day and he ended up eating from the garbage," he related. That was played out in Kinto.

Naturally, there was a lot of attention on the young lead actor and Smart-Macaulay related how he built back stories for the character to get prepared for the film. Executive producer Tomlin Paul, Joshua's father, expressed his confidence and pride in his son, who was naturally asked the direction in which Kinto will be developed. There is a slightly longer 20-minute version, but feature film development will take time as well as creative and financial resources. For now, one option is a digital platform after the film festival rounds are over.