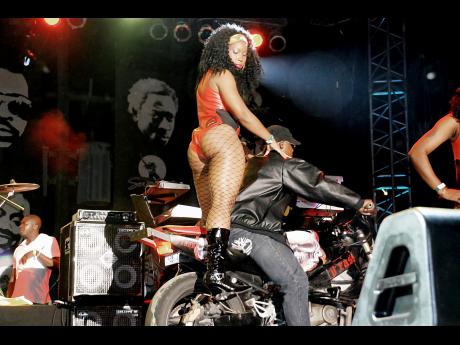 Contributed
A motorcycle was brought on stage to help showcase aspects of dancehall culture during the 2009 edition of Reggae Sumfest. 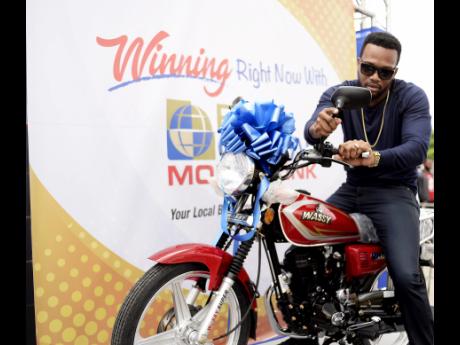 Contributed
Agent Sasco on a brand new Wassy Motorcycle as part of a promotion. 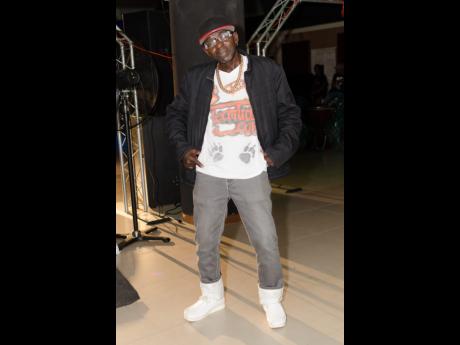 Shorn Hector
Tiger was seriously injured in a motorcycle accident in 1994.
1
2
3

As the police, especially those in western Jamaica, deal with the motorcycle (especially low-cost ones) as a tangible focal point of scamming and road-safety issues, it strikes me just how much the two-wheeled transportation is entrenched in Jamaican music.

Sure, there are the entertainers who regularly parade around on one - Luciano's black and chrome machine is memorable, as is the shiny helmet perched on his locks.

There are those who have had accidents of varying severity while riding (Tiger in 1994, Mavado in 2010, and Sizzla in 2011). Mavado has the line, "You coulda fas' like Sizzla fas' bike" in Last Night, and Sizzla has been involved in events like the 2016 Jamaica Bike Fest (but driving a car that time).

As far as accidents go, remember the line, "dem lick Ronnie Thwaites offa de piece a scooter" in Bounty Killer's Fed Up, that Ronnie Thwaites not to be confused with the Central Kingston member of parliament, goodly reverend and talk-show host.

With the motorcycle in its low-cost form being the most affordable legal personal motorised transportation widely available in Jamaica (let's leave the handcarts with engines out of this) and, at the high end, being capable of providing extreme thrills, it is not surprising that it has made its way into the country's music.

Close to the present is Ding Dong's salute to the 'Yeng Yeng', which proliferates across the island. However, we should not forget that long ago, small bikes, with their distinctive (and, for many, annoying) rasp and warble, were called 'weng weng'.

Jimmy Cliff was on a motorcycle in that scene from The Harder They Come (1972) where he shoots a motorcycle policeman who was chasing him while he (as Rhygin) was on a ganja run. Assassin was on a motorcycle in Shottas (2002) when he was shot dead by the police. Big Youth's memorable tribute to the bike of the day is the song S 90 Skank in the early 1970s, for which it is widely recorded (including by Eric Doumerc in the December 2008 issue of online magazine Perfect Sound Forever) that producer Keith Hudson had brought a motorcycle into the studio to get the authentic revving sound.

Other models have made it into dancehall music, not least of them, the Kawasaki Ninja. Johnny P gives the ladies instructions on how to do the 'Bike Back' dance in his song of the same name, imitating riding on the back of a sports bike, deejaying in the song, "If a no de Saki, de Ninja fi dem."

Beth Lesser, in her book Rub a Dub Style: The Roots of Modern Dancehall (which is available for reading on www.bethlesser.com) interviews deejay Dillinger about the writing of his song, CB 200. He relates how it was his observation of Rastafarians arriving at dances on the popular motorcycle. Barrington Levy and Trinity honour the later, more powerful version of that machine in the Jingle Bills take-off titled Flash My Dread, noting, "oh what fun it is to ride on a CB 400".

Lesser also speaks to deejay General Trees about Ghost Rider, which, it turns out, was written about a rider who would go on his night missions without any headlights. He died in a bike crash. And let us not forget the Professor Nuts lyric when he had a problem and "me ride me Honda 50 go check Dr Ken/Yu know de ol' psychiatrist outta May Pen/When him spot me a come him say r.....s yu again". In the questioning session, when Dr Ken asks Nuts if car is his problem, Nuts replies, "mi no waan no cyar, mi Honda 50 done a mad dem".

These are just a few examples of the motorcycle's connection to Jamaican popular music, and as the cops try their best to stop especially youngsters from leaving their brains on the streets when they crash without riding helmets, the State may consider utilising the same communication channel to put the safety message across. After all, heading up to 50 years ago, Big Youth said, "For if you ride like lightning, you might crash like thunder!"