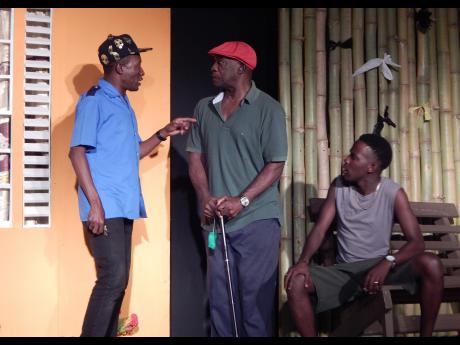 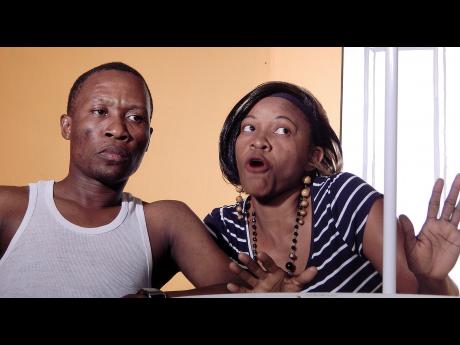 File
In a scene from ‘Uptown Ghetto’, Ranger (Leighton Smith) look dubious as he listens to suggestions from Junie (Georgette Wright). 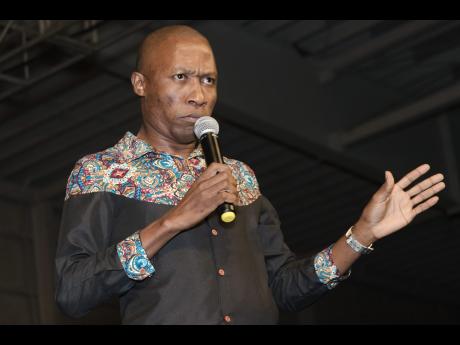 There isn't the slightest hint of laughter in Leighton Smith's voice as he refers to his fourth-place finish in the 2006 Comedy Buss competition. "It was a spiritual thing for me, placing like Lazarus when Jesus told him to come forth," he told The Gleaner. The wordplay and the possibility of new meanings and connections not thought of before are part and parcel of Smith's forte as a stand-up comedian (he recently told an audience that the Cornwall Regional Hospital took sick and had to be rushed to the Falmouth Hospital), and he often delivers his jokes without the merest suggestion of a smile.

Similarly, Smith is serious when he is on the pulpit. A Christian from before he entered Comedy Buss and an actor before accepting the Lord, Smith, a member of the House of Prayer on Waltham Park Road, St Andrew, said when he is preaching "I wonder if it was me listening, would I find it funny?" Realising that when people see him at the pulpit, they expect to hear jokes, Smith said, "There is a time and place for everything. You have some pastors who are in church and comedy and so on, but when they go to church, you would not know. Then, you have other pastors who are not comedians, but when they go to church, they give a lot of jokes."

Smith, who is from Thornton, St Elizabeth, started doing drama at the Balaclava High School (now Roger Clarke High). Unlike other school thespians, he did not take the standard route of the Jamaica Cultural Development Commission's (JCDC) annual drama competition. "I started with the church," Smith told The Gleaner. "There was also the police youth club. That is where the excitement started." There was a school connection, though, as after a dramatic performance at an annual concert where all the classes participated, "the drama teacher told me I was a natural". He eventually did productions for occasions like Drug Awareness Week and still has the trophies that resulted. "I was acting all the time," Smith said.

However, when Comedy Buss came around, Smith did not want to enter as it was sponsored by Supreme Ventures. Ironically it was Pastor Mitchell at Smith's place of worship, the Thornton New Testament Church, where he was involved in plays, who encouraged him to get involved. "Normally Christians shy away from Cash Pot, but he called and said I should enter," Smith said. He went to the last audition at the Portmore Mall, with about 300 other persons auditioning. When the field was cut to 10, Smith's was the ninth name called.

"I got my ticket to go on the bus. I got on, and I did not come off," Smith said, noting that the then communications sponsors, Miphone, did not have coverage in Thornton, so the all-important home support was missing. In addition, he said while other contestants carried busloads of supporters, he was in one car with three other persons. However, Smith said, he made fans out of other entrants' supporters.

"I did not know the bus had wings," Smith said," naming England, the USA, the Cayman Islands and other Caribbean countries among the places he has visited as a comedian, often more than once. It is hard work as a comedian cannot go to the same place twice with the same routine. However, being a Christian has its advantages - there are many events where a clean performance is required, Smith referring to a two and a half showing at a church in Brown's Town, St Ann, last Father's Day where some people left during his performance. He found out later that they just could not take any more; their jaws were hurting, and they went outside to rest.

The theatre continues to be a part of Smith's life as he teaches drama at the Balmagie Primary School on West Bay Farm Road, St Andrew. His commercial theatre roles have not stopped, the current one being Uptown Ghetto, now on a rural run. "Because of the rain, Mandeville and St Thomas did not work out," Smith said, adding that rescheduling will take place.