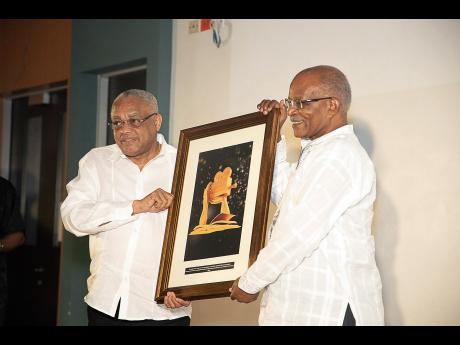 Contributed
Contributed Principal of the University of the West Indies Professor Archibald McDonald (left) receives a gift from former Govenor General, Sir Kenneth Hall, for his contribution to GATFEST. 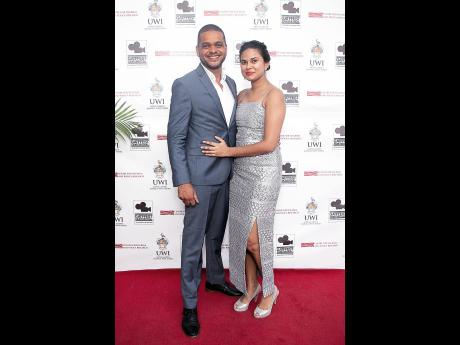 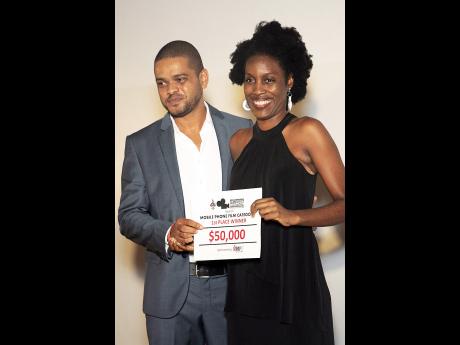 Contributed
Contributed Sanjiv Badaloo, presents the GATFEST GK MPay 2018 Award to Rhodene Watson, actress and one of the recipients of the One-Minute Mobile competition for the film Prekeh. 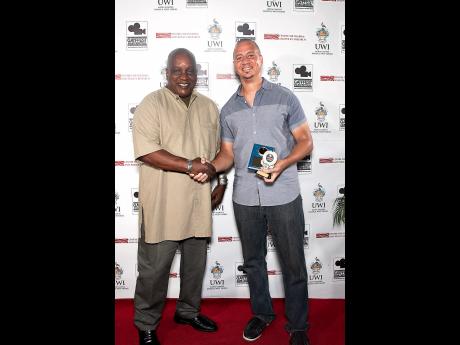 The mission of the GATFFEST Film Festival is to produce content that has the potential to galvanise underdeveloped communities and encourage disenfranchised youth to action. This year's submissions produced just that and then some - with genres ranging from documentary films to science fiction and even Jamaican folklore presented in a contemporary way.

At the awards ceremony, held on Saturday at the Faculty of Medical Sciences at the University of the West Indies, chief judge of the GATFFEST Film Festival awards panel, Dr Lisa Tomlinson, lauded the quality of both local and international submissions. While noting that the international films upheld professional standards, she also highlighted that local film-makers have expanded their own capacities to present work demonstrating widening perspectives.

For this year's festival, there were 34 international films and 10 local films in the pool. The other judges included Franklyn 'Chappy' St Juste, Ina Sotirova, Shane Slater and Juliet McCauley.

"The panel remains optimistic about local submissions and were particularly impressed with the wide scope of storylines and themes - particularly the departure from the narrative that often centres on gang violence or mirrors US 'ghetto-centric' films," Tomlinson said.

A Day in 2025 by American film-maker Ryan Turner is a science-fiction comedy that tells the story of a young man's relationship with virtual reality and his non-existent relationship with the real world. Turner took five of the 11 awards presented during the ceremony.

In the local space, film-maker Kurt Wright stood out with Origins, a preternatural production that places iconic Jamaican folkloric figures like Nanny of the Maroons, Quashie, Three-Finger Jack and Jamaica's first serial killer - Dr Louis Hutchinson - in modern times. Wright walked away with the trophy for Best Local Film.

"Local film-makers continue to make use of the indigenous landscape as a significant feature of Caribbean film aesthetic. His shift in film production is very impressive, given the little resources our film-makers are often given to work with," the chief judge commented.

To conclude the sixth staging of the film festival, Tomlinson echoed the advice given by last year's chief judge - Dr Anthony Frampton.

"There is still a need for local film-makers to spend more time and put more effort into conceptualising their stories, not just by focusing more on narrative structure, but also paying attention to core principles of visual language such as unity, balance, rhythm, visual tension, proportion and contrast. It is only through cultural appreciation where Jamaica and the Caribbean can establish a distinct and thriving film industry," she said.

The Mona Social Service Award for Change in the Community is presented to an individual or a group - that has been instrumental in making positive changes in the community, using the UWI Community Film Project as a model. This year, three candidates submitted essays highlighting their involvement with the project and how they have contributed to community development.

This year's recipient was Richard Brown, who won the judges over with his statement that in his choice to be a 'film-activist', his choice of weapon is the pen and the lens. "This quote, we felt as a panel, spoke vividly to and captures the spirit of the Mona Service Award and the possibilities the project itself has opened up for disadvantaged communities," Tomlinson continued.