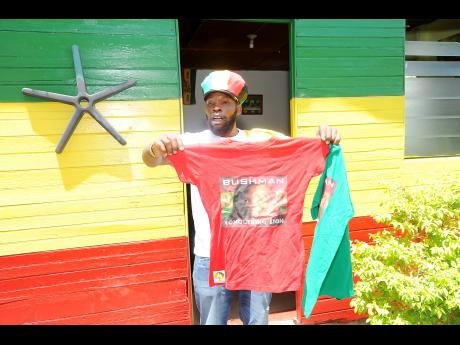 Ian Allen
Bushman at his Studio in Duhaney Pen, St Thomas, bearing the image of his album cover.

For his recently released Conquering Lion album, singer Bushman did a set of T-shirts with the album's cover art across the chest - his Burning Bushes label utilised as a signature on the right of the lower front. After this initial foray, he intends to go deeper into merchandising as an additional income stream.

"At times you go some show and people want something to keep as the memory of that event," he said. Added to that is, of course, declining income from sales of physical music media. During his shows to support Conquering Lion, Bushman went to Australia and tells The Gleaner that the 60 T-shirts he carried were all sold.

"If I could put Jamaica over Australia and turn it upside down and shake it you see," he said, laughing as he recalled how he wished for a fresh supply. After Australia, he performed in England, then the United States where he was able to restock the T-shirts, although the business arrangements were less than satisfactory.

While T-shirts can be worn in different settings, Bushman is eyeing a clothing item specific to the sand, and, hopefully, sun.

"We a plan to add beach shorts," Bushman said. In addition, there was a beach visit which added another T-shirt possibility.

"I was on Virginia Beach. Me is a T-shirt fanatic. Me collect T-shirt," Bushman said, relating how he saw a set-up where persons can choose a shirt and the image to go on it.

"One of the vision is to go to some artiste who we see eye to eye with, and license some of their pictures. Is not only Bushman picture we would want to see on a T-shirt some I-Wayne, and some Chuck Fenda and some Turbulence."

While he is definite on setting up in St Thomas, Bushman said "is something I would like to establish in Negril, Portland, even Kingston."