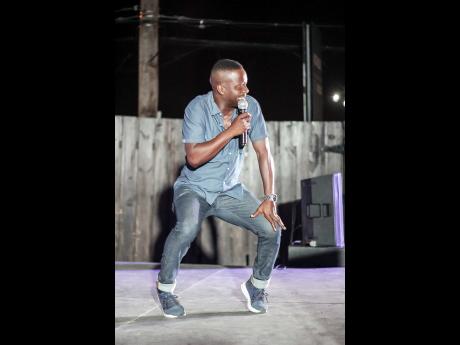 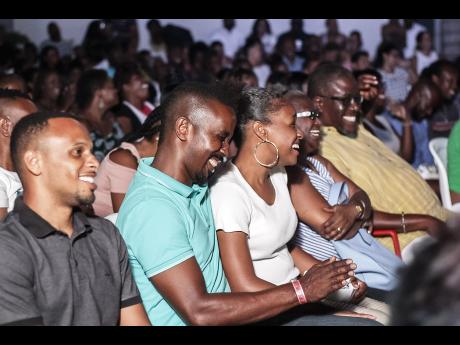 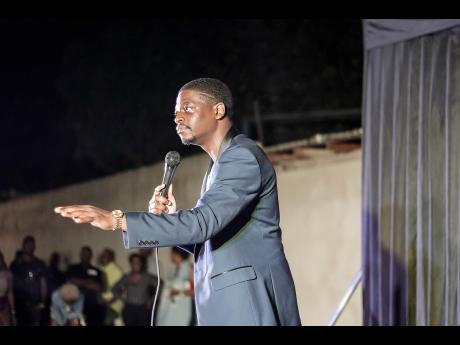 Travis Muchette
His first time in Jamaica, Shuler King had his performance laced with Jamaican element.
1
2
3

Those who have caught on to the wave, know that 100 Hope Road is the place to be on Tuesday nights to grab a drink and a bellyful of laughs.

This week, the comedian took the production to another level by producing Johnny Daley's Comedy Bar Special, which featured the talent of Kathy Grant, Dufton 'Duffy' Shepherd and international comedian Shuler King.

The show was sold out, and despite moving the event outside with seemingly amply seating provided, a significant number of patrons were left to stand for the show's entirety - but none seemed at all unhappy to stand on the sidelines.

Audience engagement was at its peak, and the camaraderie formed in the growing local comedy circle was evident. Chris 'The Entertainer' Lawman opened the stage with a fair attempt to get the crowd riled up. He said he would be popping up in-between sets - but was never seen again.

Interestingly, the evening's first set with delivered by the producer himself - Daley. Highlighting a mix of distinguishable demographics in the crowd, Daley joked about the divide between the 'ghetto' lifestyle he grew up in and uptown. During his time on stage, Daley made space to express the long-held notion that comedy fans don't come out for the locals.

Kathy Grant took the stage next, and as the only female performer, the comedienne's set was designed to find companions in her fellow women. At the close of her delivery, Grant descended into the crowd, approaching a number of men - shamelessly goading their wallets.

Dufton 'Duffy' Shepherd followed. Familiar and well liked by the audience, Duffy pulled full laughs from the crowd. However, those familiar with his previous performances, would have recognised and anticipated some of the punchlines.

Up-and-coming comedians could take some notes from the evening's host, Boasy Boy Floyd. Taking the stage in-between the headlining acts, the host demonstrated quick-fire wit, a penchant for poking at guests, and pulling one-liners. His post-commentary flavoured with his own bite-size anecdotes, managed to keep the waiting audience jittering and jerking with laughter.

But it was the unfamiliarity of American comedian Shuler King that sent the crowd reeling. Hailing from South Carolina, Shuler was visiting Jamaica for the first time. An accomplished comedian in his own right, he has performed all over the United States, and even Japan.

Shuler appeared to close his set half-hour in, but reactions from the crowd kept the comedian in place for over an hour. Teases about patties, trips to Back Road and even Jamaica's most incendiary insult made it into the American's set - which had both those seated and standing, doubling over with squeals and screams of amusement.

The weekly series will continue next week, and another Comedy Bar Special is slated for September 25.