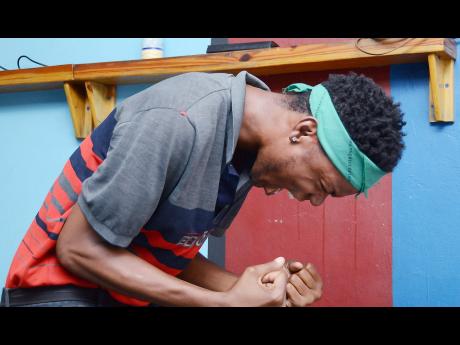 Kenyon Hemans
This patron celebrated a goal scored by his side, England, during the first round of the World Cup. 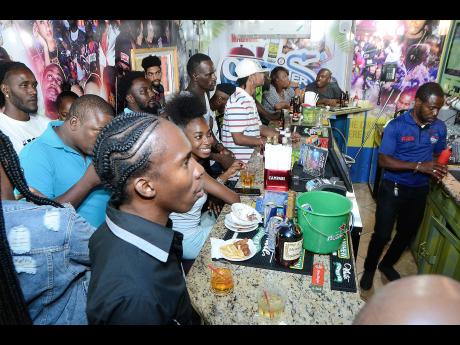 There is no escaping the World Cup, and for those who actually watch the matches - or even the highlights - there is no escaping the advertisements associated with it (has anyone else wondered if the moving car on Hyundai's digital pitch-side signage has distracted a player?). The KFC football-based ad comes up very frequently on Jamaican tele-vision, spurring even more interest in that crazy fowl special, and it leaves me wondering about more than the lads on the field being attracted more to the box of bird in hand than the chick toting it.

In a previous Music and More I wrote about the possibility of a monthlong World Cup fostering an armchair athletics approach to an active lifestyle, with persons losing their fitness levels while glued to the football prowess on display. This has led to considerations of the connection between sports and products, which are not very high on the health food ranking. Fast food in general is not, and it is incongruous to see footballers abandoning the field of play to chow down blissfully. Still, it is not a mismatch with weekend football games where male pals drive half an hour and more to play 20 minutes of football and then drink beer and chat for an hour.

And as far as the association between unhealthy products goes, there is the Wray and Nephew Contender series, the 2018 edition currently entering its final stages (did someone say Concrete at 50 years tough same way, much less Devon Moncrieffe's 41?). Plus, there is the Red Stripe Premier League - although on the hierarchy of associating unhealthy products with Jamaican football it is a step up from the former Craven A sponsorship of the nation's top league. Looking back, that was a hoot, having players puffing from physical exertion on the field with the highly publicised support of a product made for puffing off it.

When the Government tackles the sugar content of drinks sold in the nation's schools, will the carbonated drink sponsorship of Boys and Girls' Champs be addressed? That came up for questioning two years ago, but the intensified attention being paid to what youngsters are being afforded access to in schools ought to bring about some change there.

Of course, the question of a health food or drink product advertising heavily during the World Cup or holding title sponsorship for a major athletics meet in Jamaica arises and, with it, the inescapable consideration that the KFC bird, Red Stripe booze, carbonated drink fizz and Wray and Nephew whites are highly popular and profitable products outside of the sports they are associated with. None of them depend on their Jamaican sports media and on-site exposure to enter the market. We can safely assume that they are already consumed by a large number of the persons who watch the events live or on screen, so is the advertising and sponsorship not simply bonding with an already established consumer base through a shared passion?

Many years ago, I heard the tale of an outstanding American race car driver who attended a meeting with top executives of a cigarette manufacturer which sponsored the circuit he was driving in. After the meeting he realised something - he was the only one who smoked. It is something to think about.