Ernest Ranglin - the teacher, the father 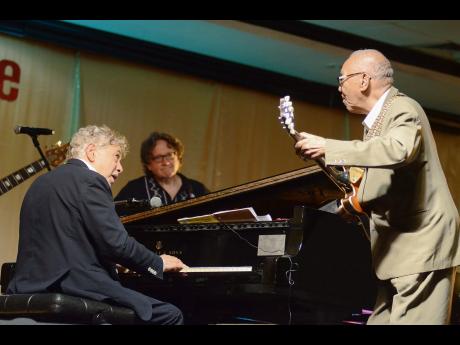 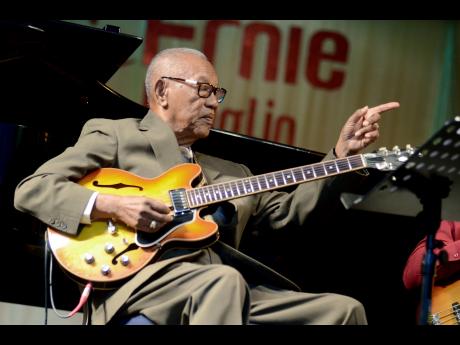 Shorn Hector
Anywhere I go over the world, I carry my flag with me - Ranglin.
1
2

Without a doubt, Ernest Ranglin is one of Jamaica's greatest musicians. Born into a musical family in the parish of Manchester, he was exposed to every genre of music. However, he has not performed in Jamaica for many years. That ended on Sunday when, along with Monty Alexander, he gave a stellar performance at The McCam Child Care and Development Centre fundraising concert, held at The Jamaica Pegasus hotel.

"It is always good to be back. It is my country, and I always love to do whatever I have to do for my country because no other place is like Jamaica," he told The Gleaner after his stellar performance. "And anywhere I go over the world, I carry my flag with me. They know that I am a Jamaican, and I try to do my best so that they know that good things come from Jamaica," he added.

Alexander disclosed that he first met Ranglin when he was about 10 years old, and once in a while they get together, as was the case on Sunday. "It was wonderful performing as always. Ernie is one of the great masters of music - not just Jamaican but all music. It was an honour to play with him, and we have to do it again and again," Alexander concluded.

Also performing with Ranglin on Sunday was drummer Desi Jones. It was just one of the many times they have performed together, one other occasion being the 50th anniversary of Island Records in London. Jones says its always a learning experience working with Ranglin.

"Working with Ranglin is like an experience. It's like you are back in school, you are learning - all you have to do is follow him, and you learn a lot. I have learnt a lot of tunes and songs from him. And I watched his approach to his guitar and kinda transfer it back to my instrument."

The 86-year-old Ranglin, who celebrated his birthday on June 19, says he no longer remembers titles, "but as the melody comes up, I remember them and I just play it. It is millions of tunes I have to play, but I just try to do my best," he said humbly.

His humility is not lost on his daughter Maxine Cann, who told The Gleaner, "He is a very simple and humble individual, and that's what we like about him."

And for that she says she feels very honoured to be his daughter. She spoke of going "to the jazz concert with him sometimes" in her early days, and that he was "very instrumental in giving us the love of music. But to see him up there tonight, vibrant, [and] jumping around, it was a wonderful experience. He is 86!"