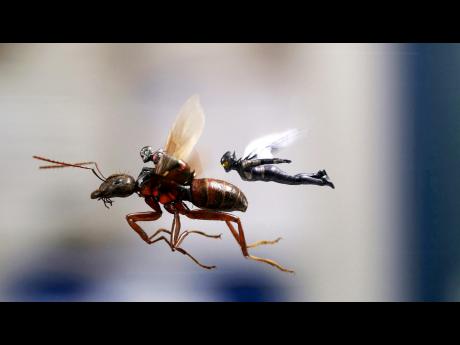 AP
Ant-Man and the Wasp in full flight.

Throughout Ant-Man And The Wasp, I couldn't shake the overwhelming feeling of familiarity. Not just because this is the 20th film in the Marvel Cinematic Universe, but because the film felt like something I had seen thousands of times before. It wasn't until the third act that it became abundantly clear. Ant-Man And The Wasp is not a movie. It is a very long episode of a Saturday-morning superhero cartoon.

Much like a serialised cartoon, Ant-Man And The Wasp opens with a narration that serves as a 'previously on Ant-Man' segment. It's quite serviceable if you haven't seen the first Ant-Man, or if it's been three years since you did. After demolishing an airport in Captain America: Civil War, Scott Lang, played by Paul Rudd, has been placed under house arrest. His previous cohorts, Hank Pym (played by Michael Douglas) and Hope Van Dyne (played by Evangeline Lily), have been on the run. When it turns out that Scott may be the key to rescuing Hope's mother from the mysterious quantum realm, the gang reluctantly gets back together in a race against the clock, as well as the numerous bad guys trying to get in their way.

In both its plot and characters, the film is perfectly comfortable with its identity. Plot-wise, much of the movie is Scott Lang trying to balance being a hero and a father. It leads to some very sitcom-level scenarios, where there may as well be a laugh track inserted by the filmmakers. Aside from that, the film's antagonists are both the best and the worst kinds of villains. They are, by the numbers, making mandatory maniacal speeches, but the movie uses them to great effect. They're fun props, but they're by no means characters.

Of course, Ant-Man And The Wasp also has some wildly fun action scenes that you can't really find in other movies. The shrinking/growing technology, combined with control of San Francisco's ant population, gives the film a licence to be as wonderfully ridiculous as possible.

Ant-Man And The Wasp is fully aware of what it is and dives headfirst into its identity. It's a funny, charming, and perfectly fine movie to make you forget about life for an hour or two. Still, for those looking for something more, this movie is not that. It's a Saturday-morning cartoon, brought to life.