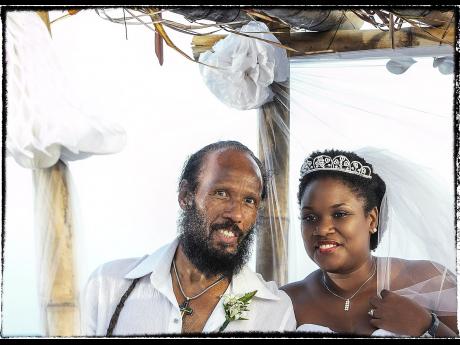 x
Carrot Jarrett and Alisia Lawson in a loving embrace on their wedding day.

Alisia Jarrett fell in love with Irvin 'Carrot' Jarrett during a midnight to sunrise conversation. She had felt the literal heat of his hand days earlier, when Carrot touched her during one of several checks to ensure she was OK during a wellness event at Wickie Wackie, Bull Bay. But it was the conversation which bonded them.

"That was the moment I knew we were connected. That is when I fell in love with Carrot," Jarrett said. The naturopathic healer and former member of Third World Band was certain about what he wanted, as he told Alisia during that conversation "you are going to be the next Mrs Jarrett".

And she was - as they were married in 2013. Carrot passing away on July 31, 2018. "The love that Carrot showed me, that selfless, unconditional love, made me love him more. I loved Carrot initially because I think Carrot loved me first." Jarrett said, describing how her love for him, as strong as it was initially, grew even more. Carrot Jarrett and Alisia Lawson in a loving embrace on their wedding day.

She emphasised that it was this spiritual intertwining which made her enter a relationship which logic would have ruled against, one of the factors being their 21-year age difference. As part of putting her at ease, Carrot would joke about living until he was 108 years old. "I don't know where he got it from, but Carrot always said that," Jarrett recalled, saying that in turn she would joke about how long she would have to live then.

"Carrot prepared me for transitioning in general. He explained what transition was and death and that death is a part of life. If you have life, then you must have death," she said. "The man left me with so much love, it is what is making me so strong now ... . He would not have left if he did not know I would be okay. It is day three and I am OK. I don't hold back the tears, but then I am OK again," Jarrett said as she spoke to The Sunday Gleaner on Friday afternoon.

She sees Carrot's thoughtfulness in the moment of his death, as "he took a cushion off his chair and put it on the yoga mat, lay down on his back and just went", Alisia saying that he would not have wanted her to see him suffer. "He did not die at the hospital, he transitioned at home. When I took him to Andrews (Memorial Hospital) I knew he had already passed," Jarrett said. However, that passing does not mean going away, as she said, "even when I was in the grieving room at Andrews, I was still hugging him, kissing him. I felt his spirit. He has his space at home and when I go in I talk to him. I walk in and say 'good morning babe'. You have to take off your shoes when you go into his study".

There was Carrot's playful side, Alisia laughing as she remembered her daughter saying that Carrot was cute. When she told him he immediately asked, "So what you think?" Between them there are 11 children and Alisia said, "The day he loved me, Carrot loved my five children ... Carrot always said he has 11 children. That is the amount of children he left to mourn or celebrate his life." They did not have any children together, a decision made to maximise the time they had together.

"I have memories cyaa done ... . He was living as a spiritual being in a human body. He was amazing," Jarrett said. "It is a shock. I feel it and I break down, but I am at peace."

The remembrance service for Irvin 'Carrot' Jarrett will be held on Wednesday, August 8, at Webster Memorial United Church, 53 Half-Way Road, The family is asking that guests be punctual and wear cheerful colours.