Wayne J is growing up - What a difference five years make 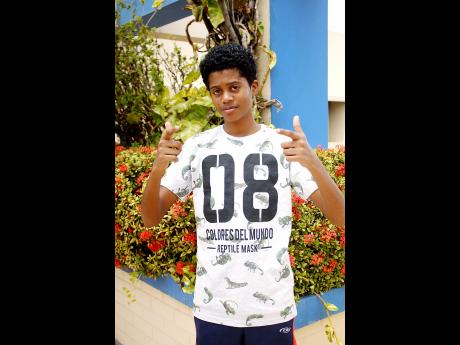 Wayne J's newest single, Better Days, is not meant to be just another song in the child star's musical catalogue.

The 15-year-old deejay, who was raised in Waterhouse and currently attends Hydel High School in St Catherine, makes a winning blend of old-school dub expressions fused with the conscious fast-flowing of modern dancehall hits. That is what attracted the Barcelona-based producers Green Light Sound System that produced Better Days and a few other singles for Wayne J.

"We love the 80's Jamaican style, and Wayne J has it embedded in his DNA - his versatility, moving from one style to the next, allowed us to connect with him from the first minute we heard him," owner of Green Light Daddy Sevi told The Gleaner.

He added, "The very important thing, too, is the positive message that he brings - not often we find youth talking about the future, and he is one that is not interested in talking about money, sex or guns - we love this about him."

It has been two years since Wayne J and his team partnered with Green Light, and come September when school reopens, another production, titled Upful And Bright, will be released. "Our idea is to produce several singles. Each single will come with dub versions, rhythms and remixes - we are waiting now to receive Better Days in a 12-inch vinyl as well," revealed Daddy Sevi.

Five years ago, Wayne J was recording songs like Stay In School and 18 and Older; both tracks on his Ah Wayne J Enuh EP were focused on telling youth about the importance of getting an education. Now, his recent singles focus on more socio-political topics, including the hardships of persons living in the ghetto.

He says he wants to create music that live through the generations, and that he will continue making music to uplift people even 10 years from now.

The Slacky Mouth deejay says most recording artistes his age are focused on the 'hype' of the industry, and not the lyrics that is being put out.

"Most will sing negative or slack songs when they should aim to be more positive, because them have younger youth looking up to them. The society can't manage heavy music, it is already burdened with the negative things, but I am trying to make a difference by changing the thought process," he ended.

The young deejay is currently involved in environmental protection campaigns, small-scale mentorship programmes, and has used his summer holidays for studio recordings.

"Everybody knows I am famous in school, but I remain focused. At school I am Wayne Smith (his birth name), and on the stage I am Wayne J," he said. "The type of songs young people, even my schoolmates, are writing make them feel big and like them can do what they feel, so parents can't even speak to them when they try to guide them."

Age and maturity is also the reason the young deejay's management team has not jumped on the big tour train even though there is a great demand for him to perform, especially in Europe.

"Right now I am trying my best to put out good music, so that globally, people can look up to me," said the teenager. Green Light [sound system], in collaboration with Greatest Records (which is the label owned by Wayne J and his manager Dennis Hamilton) is planning a trip for him to Europe next year is so that he can get familiarised with new cultures and the touring environment.