Popularity helps performer get into rehab 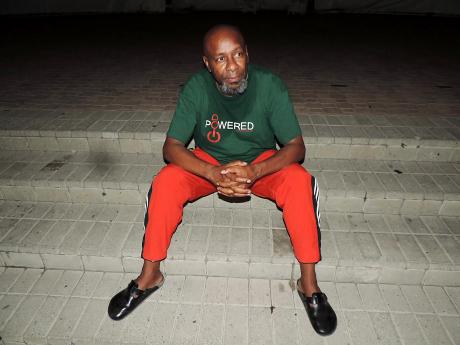 Mel Cooke
Errol Fabien sits on the steps of the bandstand, Emancipation Park, New Kingston, on Thursday evening after completing a walk from the UWI, Mona Campus.

When he wanted to get into a rehabilitation centre to deal with his drug addiction, Errol Fabien was a well-known entertainment figure in his home country, Trinidad and Tobago. As it turned out, it was the actor and comedian's popularity that proved the tipping point in him accessing the programme at New Life Ministries.

He wanted to go into rehab, an important pre-condition for getting out of the grip of addiction. However, getting into the programme required going through a rigorous screening process, and Fabien said, "I got in because I was a known artist." During the screening, there was the very strong possibility that he was going to be turned down and Robert Ward, who still works there, was instrumental in him getting in. The reasoning was that Fabien could in turn influence many persons and, as he marks 30 years of being drug-free, his series of two-hour walks in 15 countries is generating an awareness which further justifies that thinking.

For the most part, Fabien is walking alone or with a few people, but when he gets to Trinidad, the numbers are expected to swell. In other countries there is no gathering and speech at the end of the journey, but Fabien says "in Trinidad I guess I will have to speak to the people." There could be a number of persons joining him in St Lucia as well, as Fabien says "I do work with a lot of NGOs there."

Assessing his artistic output when he was using nicotine, alcohol, marijuana and crack cocaine to after rehabilitation, Fabien said, "There was a transformation of my work. When I look at what I did before and what I did after - chalk and cheese. Apples and oranges. I thought I was an artist before." While he can look back at three decades off drugs, Fabien is not setting his sights on the long view ahead as "staying drug-free is one day at a time. Today is doable, attainable, what you have".

He is more than satisfied with doing what he can with what he has. "I am very, very happy," Fabien said.