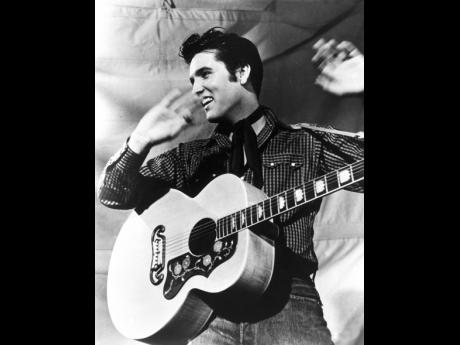 Today makes it 41 years since the death of Elvis Presley. And whether you like him or not, the mere mention of his name will always cause raised eyebrows - resentment, acceptance, love or hate, depending on your perception of him.

Riding on the back of Rock 'n' Roll hits like Jailhouse Rock, Don't Be Cruel, All Shook Up and Teddy Bear, between 1956 and 1958, Presley became known worldwide as the King of Rock 'n' Roll. In Jamaica, he was also a household name, and as a boy I recall his records being a regular draw by jukebox selectors, and a must-play at dances and parties in Kingston. Truth be told, Presley rock stance had a profound influence on early Jamaican music, and he was well loved by Jamaicans.

But when rumours began to swirl in the early 1960s about derogatory comments he allegedly made against blacks, there was a complete about-turn by many of his followers. He allegedly said, "The only thing Negroes can do for me is shine my shoes and buy my records." The comment, however, runs contrary to Presley's early upbringing and lifestyle. Many of his musical associates, including James Brown, bluesman B.B. King, Sammy Davis Jr, Rufus Thomas, Jackie Wilson and Mahalia Jackson - all black artistes, have vouched for him to the contrary.

Presley's official website, Elvis Australia - Elvis and Racism, The Ultimate Definitive Guide, further states, "In heavily segregated Memphis of that day, Presley was regularly seen at black-only events." He was glaringly portrayed as a white man with a black heart. Sam Phillips' Sun Recording Company in Memphis, Tennessee, was the first to record the teenager in 1954 with Presley's composition - That's All Right Mama. Phillips wanted to bring the sound of African-American music to a wider audience, and saw Presley as the one to help him achieve that - the white boy with a black sound.

Born into a poor white sharecropping family in Tupelo, Mississippi, on January 8, 1935, Presley's early life was grounded in poverty. His depression-scarred father struggled to support his family, and moved north to Memphis in order to escape the poverty they were experiencing in Mississippi. It was in Memphis that Presley got hooked on the music of pioneering black artistes, and became immersed in black Memphis nightclubs and black gospel concerts.

The gospel concerts he attended seemed to have influenced Presley's decision to record gospel songs, and that he did with great success. His triple-CD compilation album of 2000 - Peace In The Valley: The Complete Gospel Recordings, debuted at number 13 on Billboard's top Contemporary Christian album chart in January 2001. Among his early gospel releases were Take My Hand Precious Lord, It Is No Secret, If We Never Meet Again and Crying In The Chapel - all done between 1956 and 1960.

Although Presley achieved so much in the Rock 'n' Roll genre, ironically, his only Grammy awards were for gospel in the category of Best Sacred Performance. They were How Great Thou Art (1967), He Touched Me (1972) and a concert recording of How Great Thou Art (1974). He died on August 16, 1977, at age 42. Interestingly, it was the same age at which Peter Tosh and Dennis Brown died.