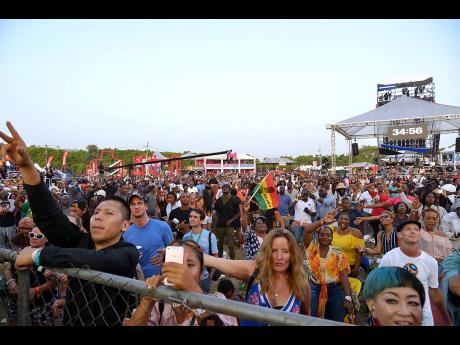 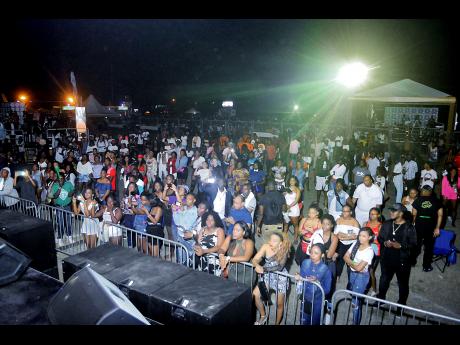 Anthony Minott
A section of the crowd at Summer Sizzle.
1
2

Somebody has got to be making money from the number of music events being held in Jamaica - and not only the providers of mood-enhancing accessories - alcohol, marijuana, blow-up pools (for the wild water editions), see-through blouses and slingshot drawers.

The state is certainly raking in a good wad without breaking a sweat. The 2016 Economic and Social Survey, published by the Planning Institute of Jamaica (PIOJ), showed that combined, the parish authorities raked in $107.3 million from issuing 23,105 amusement licences - a legal requirement for the holding of a wide range of events. And earlier this year - in Reggae Month, no less - there was a proposal in the Kingston and St Andrew Municipal Corporation (KSAMC) that fees be hiked, notably for high-end events, from $15,000 to $40,000. Whether or not that was in response to falling revenue (the Economic and Social Survey for 2015 showed a significantly higher entertainment licences intake of $124 million islandwide) was not said.

While we could argue all day about the fees being exorbitant or not, the fact is that they are being paid (and, I am sure, there are many entertainment events which go under the radar and avoid being billed, or are informal gatherings which just grow without being advertised). And it must be noted that there are several other fees and/or licences involved, as a story in The Gleaner on Thursday emphasised yet again - the Fire Department, solid waste disposal services, Jamaica Association of Composers, Authors and Publishers, Jamaica Music Society and Office of Disaster Preparedness and Emergency Management) among them.

Against this background, the consistent complaints about the lack of sustained concerts in the birthplace of so much music take on a different tone. And as we look at events like the newly revived Summer Sizzle centred around deejay Beenie Man's birthday and anniversary in music, as well as Reggae Sumfest with Joe Bogdanovich's determination to make it an experience competitive with any others globally, we must consider how to keep the smaller events vibrant.

It is obvious, but still needs to be said, that it is these events which are the practising ground for performers to move on to the huge stage, and also the place where fan bases which propel them to wider acclaim are created and nurtured. From time to time, I have covered events where the organisers publicly thank the municipal authority - most times the KSAMC - for its support by waiving or reducing fees. That is commendable, but it would help significantly if there was an established system of fee reduction by several agencies which an event organiser has to get an OK from in their start-up phase. In other words, the entrepreneurship should be encouraged and nurtured.

Also, having the organisations to whom fees are paid put something back into the business of entertainment may make having to fork out the cash a little easier to swallow. So if a part of the fee went back to umbrella orgainsations to host development workshops for their members - say the Jamaica Association of Dramatic Artists for the actors and actresses, as the people hosting plays are mandated to have amusement licences as well - then maybe it would make parting with the money a tad easier.

Or it could be seed money for that much-longed-for state-of-the-art performing arts centre I have heard performers longing for the better part of two decades - most recently at the celebration of the life of former Third World Band member Irvin 'Carrot' Jarrett at the Edna Manley College of the Visual and Performing Arts two Fridays ago.