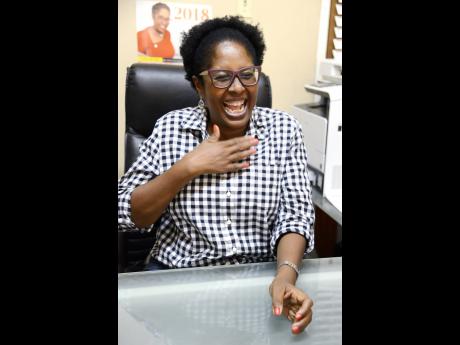 Ian Allen
Angela Brown Burke loves talking about Jamaican music but admits that she is no entertainer. 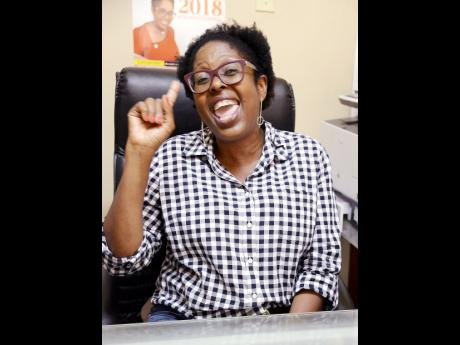 Ian Allen
Songs from Etana and Queen Ifrica are what calms Angela Brown Burke to centre before taking to the podium. 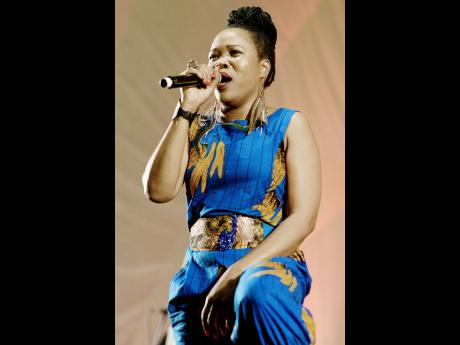 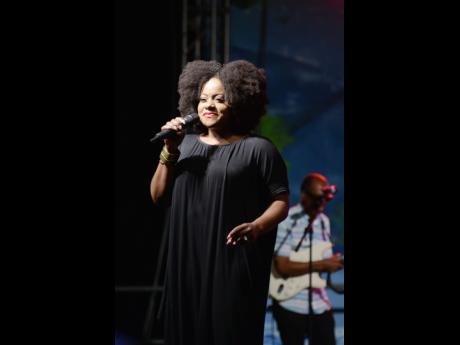 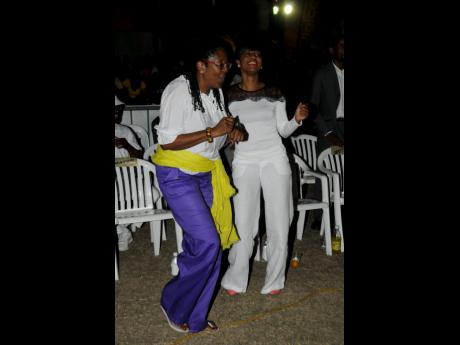 Behind the conservation and powerful image of Dr Angela Brown Burke is a down-to-earth individual who appreciates speaking about Jamaica's entertainment industry, while openly admitting that she is in no way an entertainer.

Brown Burke is the only female in the group of six running for one of the four vice-presidential seats in the People's National Party. A current vice-president of the PNP, she is also the party's spokesperson on local government, a responsibility that usually finds her at the podium, which, surprisingly, is not easy for her. "I usually prefer small crowds over large ones, but if I don't get nervous, that also sends me into shock," Brown Burke told the Sunday Gleaner. She revealed that listening to Etana's I Am Not Afraid and Queen Ifrica's Lioness on the Rise helps to centre her before taking to the podium. "The songs centre me not simply because they are by female recording artistes, and we know how hard the struggle is for women in the music industry, which parallels the journey of female politicians, but because the words resonate with me help to clear the mind - and can remind women of who they are and their complete purpose."

AB: It is eclectic a mix of every little thing. My tastes are influenced by my upbringing in the rhythm and blues era, hearing Jim Reeves records my mother used to play on a Sunday; by my travels, when I am exposed to new cultures; and by my four sons, who will introduce me to some of the more contemporary music. I especially love finding genres that blend our reggae.

Throughout my travels, I have acquired albums in Spanish, French, and African language that mix the country's signature sounds with Jamaica's musical forms. Music that sounds good is what you will find in my collection.

I also like local theatre. I think it is one of the best things that Jamaica has - the depth of talent of our performers, who are able to take some really serious issues and deal with them in a manner that makes light of them but are still able to get the real message across. I also love to watch films. I laugh at a comedy, I cry at a tragedy, and I am not afraid to cry.

AB: While I don't see myself as one of the entertaining personalities, and when I speak it is not necessarily to entertain, it is important to the political discussion. I believe everything does not have to be straight and hard-nosed, and because we are complex human beings, it is important to always bring that lighter side in not necessarily seeing it as entertainment in that perspective, but whatever way it can be added.

AB: For the singer, Natalie Neita-Headley is the best, maybe because I have not heard much of the others sing a tune. But out of the ones I have heard, she definitely leads. Everyone keeps telling her she can quit her day job and take up singing as a career. I don't take what my colleagues do at the rallies too seriously, and most of them that dance old school ska or modern moves, two steps on stage, and it's over.

AB: There needs to be an assurance that the entire gamut has space for everybody, not only the big players, for example, with round robins that take place at the community level. There is a balance that needs to be achieved between knowing their rights and the opportunities it provides for economic livelihood and as a means for individuals to relax, as well.

People who are involved in these activities need to feel as though they have a stake in the entertainment industry. More discussion must happen around entertainment as a reflection of reality and as a tool that shapes reality, especially in a society where we are concerned about morals and values.

There needs to be an understanding that entertainment is a reflection, and to create the balance - pull music that people love to hate into an educational space so the youth can form views and have open minds so that it can be understood at every level of society.

AB: Set up! I am one of the persons who believe the circumstances surrounding his incarceration were part of a set-up and an unfortunate one, especially as I am a fan of Buju Banton and his music.

AB: The colour of his hair and vivid personality come to mind. He is one entertainer that always owns his individuality, and that's important.

AB: I admire her determination as a female that has experienced the struggles of the entertainment industry, and I like her 'Jamaican-ness'.

AB: I remember being in first form in high school when he was "all the rage," I loved his dances but couldn't even hop to them.

AB: Her song If I Were A Boy pops into my mind because it captures so clearly the kind of male-dominated environment we are living in, and whether the listener is a male or female, it helps to shape thoughts unknowingly.

AB: My youngest son loves to listen to Vybz Kartel, and part of what that has done is make me pause and think of the society and what needs to be accomplished. Vybz Kartel symbolises the need to have a discussion about who we are and finding a space where individuals are not placed in a corner. The truth is, he is an icon for many of our younger people.

AB: I love his music, especially for those quiet moments of introspection, relaxation, and just holding a vibes.

AB: She is the epitome of her name full of spice. She can do adult entertainment and clean it up when it is necessary.

If you were a recording artiste, what's one experience you would like to have or like to do to have an impact on your country?

AB: If I were an artiste, I would love do a performance with the musical fraternity that brings uptown, downtown, and round town together and use a collection of original songs to show the positive side of my country that would help to give hope to young people while simultaneously acknowledging the challenges.