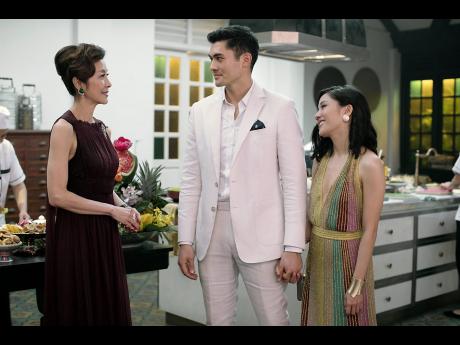 'Crazy Rich Asians' is the story of Rachel Chu, played by Constance Wu, a Chinese American immigrant who is smitten with her dashing boyfriend Nick Young, played by Henry Golding.

When Nick asks Rachel to accompany him home to Singapore for a wedding, she's of course anxious to meet his family. It's only later that she realises his family is one of the most powerful and wealthiest in the world.

The story in Crazy Rich Asians is sweet, light, and admittedly enjoyable. It has fun, zany characters that make up Nick's extensive family, and every Asian actor you've ever come across. Yes, the film's cast is entirely Asian, and is all the more refreshing for it. The whole affair has a surreal aesthetic to it, as Rachel tries to navigate a culture she's had no experience with. The real challenge comes in impressing Nick's mother - Eleanor Young, played by Michelle Yeoh. You watch as the eager to please and timid Rachel tries-to-earn the respect of the intimidating and larger-than-life Eleanor.

Beyond the family itself, larger than life describes everything else in 'Crazy Rich Asians'. As the title suggest, the film boasts an insane level of extravagance. To that end, the film delivers - from their homes, their cars, their gardens, to their clothes. It's a level of excess that no doubt overwhelms the main character, but is also fascinating to watch as a viewer, especially as it relates to food. Enjoy 'Crazy Rich Asians' on an empty stomach at your own risk. There are scenes entirely made up of the preparation of food, the enjoying of food, and talking about food. It's not a film to see if you're hungry.

There have been countless films about young lovers finding it difficult to reconcile with their in-laws. 'Monster In Law', 'Meet The Parents', 'My Big Fat Greek Wedding', - and those are just the ones that start with 'm'. Although it's a familiar story, it's safe to say it's never been told quite like this. Certainly, there are lines of dialogue that felt like they are taken from other stories like this, and some characters who seemed like plot devices rather than people, but overall, the film is a light-hearted and fun experience. It might be a story seen before, but it's about time it was seen with a cast that's previously been unrepresented and stereotyped to kingdom come.