'They will feel something' - Copeland & Richardson to inspire future ballerinas 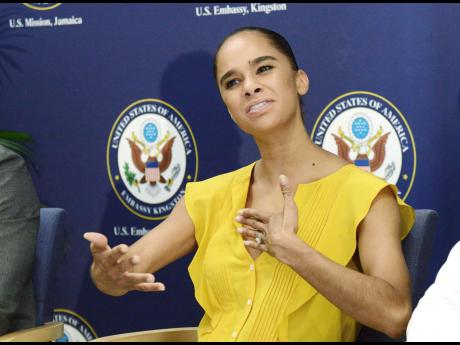 Rudolph Brown
Misty Copelandmaking a point at a press conference at the United States Embassy on Old Hope Road yesterday. 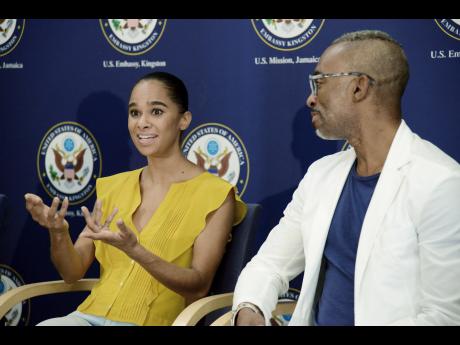 Rudolph Brown
Misty Copeland makes a point while Desmond Richardson looks on. Both are part of a 20-member dance delegation to the island. 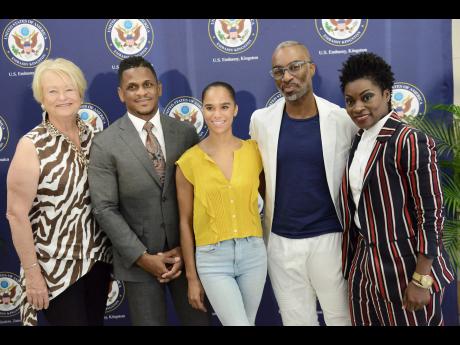 In 2015, Misty Copeland gained worldwide attention when she became the first African-American principal of the famed American Ballet Company. Tomorrow and Saturday, she will perform in the island for the first time. PliÈ for the Arts, in partnership with the US Embassy, has arranged the performance.

Copeland is part of a 25-member dance delegation, which includes Desmond Richardson, the first African-American male principal of the American Ballet Company and co-founder and co-artistic director of Complexions Contemporary Ballet.

At a press conference at the United States Embassy yesterday, both expressed immense gratitude for this opportunity to share their expertise within the Caribbean, particularly to rail against a lack of representation in classical dance forms and to offer their reassurance that anyone can become a principal ballet dancer.

"It's so easy for our communities to say, 'I don't like ballet', and that's because there is no real, visceral connection to it. If people come to the theatre and they can see themselves represented, it doesn't matter what the form of dance is, they will feel something. They will feel a connection to that. I think that's kind of what has been missing - in terms of the African-American/black people feeling like they can do it," Copeland said.

Led by Richardson, Complexions Contemporary Ballet has previously visited and hosted showcases on the island, and his sentiments stem directly from his heritage. "For the diaspora, especially the Caribbean, it's very important because my family is from Barbados. My grandmother would say, 'it's a huge opportunity being at the Metropolitan Opera, but don't carry it; use it.' [Dance] is something that you use, and it can be inspiration for so many different people. So I love that fact that this has happened and is happening again," he said.

According to principal of Plie for the Arts Marisa Benain, both performances were sold out in two days, and infrastructural limitations ultimately scaled the event.

"I'm really sorry that so many persons will not get to see the performance. I appreciate the crave for attending, but I do hope that this will inject some alacrity. I'm hoping that this will be the opportunity for the promises that we've had that we will have a performance space. [If] we had a portable spring floor, maybe I would have moved it to the National Arena. I know we would have filled it. But we all understand, if you don't have a proper floor, there is no way that you will have international dancers come and dance," Benain said.

Michele Rollins, patron of the event, echoed Benain's concern. "I sit here thinking, a floor was all that stopped us from being at the arena? We need to fix those things because there's so much talent here. It gives us a chance to show the world that we are an upscale arts country."

In addition to two evenings of performance at The Little Theatre on Friday and Saturday, Copeland and Richardson will conduct master classes with young Jamaican dancers and instructors. "I think that's something I really want to educate people who don't know about dance, that it's not just an extra-curricular. It's not something that easy where you're not using your brain," Copeland shared.

Recently, the accomplished dancer travelled to Rwanda with an organisation dedicated to bringing dance to street children. She said of the experience, "It's proof to me how much dancing can build someone's mind and connect their cognitive skills. The way their brains are developing, they're learning at a much quicker speed. To me, people without art in their life aren't reaching their full potential."

The lesson Richardson hopes to impart is one of openness. "I always say that you are unique, you're necessary, and you're valid. The world wants to see you, and wherever you are in your technical prowess is necessary. We're here to give you some tidbits on your journey. I didn't start with classical. I started with hip hop, and then I moved into classicism and other dances. All I want is for you to be open," he said.