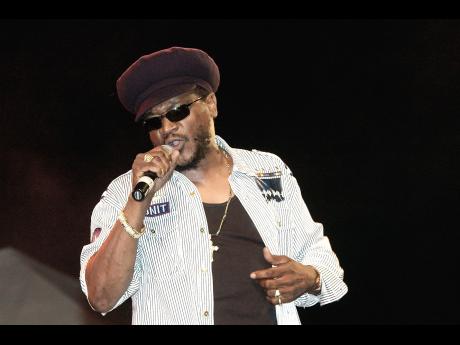 Whether the action was on the small black and white television screen at home or in the cinema where the dangers loomed much larger in living (and dying) colour, deejay Lone Ranger's mother was a horror flick fan.

She would involve her boys in the scary experience. Lone Ranger chuckles as he remembers how they would "hitch up" in the living room in England (where he migrated to from Jamaica when he was five years old). And it was this sharing of being scared as they watched Dark Shadows which led to his breakout hit Barnabas Collins in 1979 - the song named after the television series' main vampire character.

Lone Ranger told The Sunday Gleaner that when he got the riddim in Jamaica some years after his England experience, the lyrics were "very easy" to write, and points out that the song is literally a recreation of the show's action - with a Jamaican flair. So he deejays:

Him eye get red an him hair start dread.

Him teet get long, man him start feel strong."

And as women are Barney's meal of choice, Lone Ranger advises:

"It came out originally on the Thrill Seekers label, but after that it was distributed by producer GG Ranglin. The original producers were Chester and Leon Synmoie. After GG's took it over and it big up and take off, GG's made a deal with Chris Blackwell to distribute it in England on Island Phonogram," Lone Ranger said.

Barnabas Collins was recorded in an afternoon session at Channel One on Maxfield Avenue, St Andrew, bypassing the accepted route of the lyrics being tested and proven in live dancehall performance before being recorded. Still, even without having had the conformation of an audience's reaction, Lone Ranger was confident he had a hit on his hands. "How mi do it, is like you see the show itself," Lone Ranger said.

That extends to the high horror point of each episode of Dark Shadows, the Barnabas Collins sinking his teeth into the vulnerable neck of his victim. Lone Ranger adds some humour into his depiction, as he deejays:

He chose to use the name of the still popular chewing gum brand because it rhymes with business, the last word in the preceding line, and its popularity. "At the time Wrigley's was a big brand in England and it suit the lyrics," Lone Ranger said. "Anywhere I go I do that part, because it is a big thing for the audience." He has never been contacted by a representative of Wrigley's about the brand mention, Lone Ranger humorously remarking "they should."

Barnabas Collins led to him performing on Reggae Sunsplash at Jarrett Park, Montego Bay, St James, in 1979 - the same year Bob Marley performed at the festival. Lone Ranger, who was linked with Soul to Soul sound system, said its owner, Senior Superintendent Grandison, told him he was slated to open the night that Marley was on. Lone Ranger said he went on stage in a "tall jacket" and opened with a freestyle lyric Hengman Skank before doing Barnabas Collins. He still remembers the headline of the STAR story about his performance - 'Lone Ranger captivates audience at Sunsplash'. "When mi see that headline mi know mi big," Lone Ranger said. And he was right as "from there everything take off."

And he retains another Sunsplash moment in his head, a nod from Bob Marley after he finished performing. Marley was backstage in a white van, alone with a baby who, looking back, Lone Ranger believes could have been Damian 'Jr Gong' Marley, who performed at Reggae Sumfest in Montego Bay this July, on the night of his 40th birthday.

Lone Ranger's mother also carried her sons to the cinema for horror movies the deejay counting Vincent Pryce, Christopher Lee and Peter Cushing among her preferred actors. Lone Ranger extended his horror-based lyrics to two other songs on the album for which Barnabas Collins was the title track, Annie Palmer and Frankenstine.