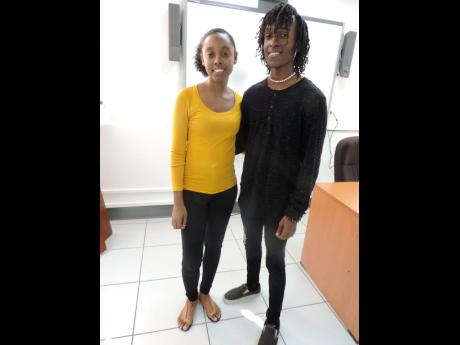 Mel Cooke
Bass guitar players Krysten Henry (left) and Salim Browne at the Edna Manley College of the Visual and Performing Arts on Thursday, where the students each received a US$1,000 scholarship from Jah Jerry Inc.

Salim Browne and Krysten Henry came to the bass guitar via different paths. Henry started out playing keyboards, like her mother, but tells The Gleaner: "I was always watching my father playing bass. I felt like I was playing the keyboard for someone else, not for me." When she was 18, Henry's father "actually gave me his bass to play", and now she is specialising in the instrument as a second-year student at the Edna Manley College of the Visual and Performing Art.

Browne, who is also an Edna Manley student, has been playing the bass guitar from he was about six or seven years old. "I started playing in the primary school band," the former St Richard's Primary School student said. He comes from a family of musicians, currently plays with singer Kelissa, and also has his own 6Points outfit. Henry is also a member of a band, a five-piece outfit.

The similarities do not stop there as on Thursday afternoon, Henry and Browne both received US$1,000 scholarships from Jah Jerry Inc., a foundation established in honour of the late Skatalites guitarist Jerome 'Jah Jerry' Haynes. The handover was done by Jah Jerry's son, Jerome Haynes, at the college on Arthur Wint Drive, St Andrew. It was the sixth time Haynes was making the annual donation, and he told The Gleaner: "I feel this is a passion of mine, and also, it is consistent with the legacy of my father - helping others, giving back - especially to young people. At Studio One, my father was always teaching people."

A SENSE OF PURPOSE

"I love doing this. It has given me a sense of purpose and a lot of gratification," said Haynes.

In addition to the two scholarships, Haynes also presented four computers to the Alpha Institute. The annual donations are funded through events held in the US, where Haynes is based. This time around, there is an additional scholarship, to Miguel Lavarde who attends Lehman College in the Bronx, New York, and who also plays the bass guitar. Haynes chuckles as he points out that Jah Jerry Inc. is mandated to support guitar students nationally as well as outside of the country - nationally in this case meaning in the US, where the foundation is based. "I guess we started internationally," Haynes said humorously.

Henry and Browne were very happy with the continued international focus of Jah Jerry Inc. Henry told The Gleaner:"I feel good. This has helped me so much paying part of my school fees. My parents have been appreciative of this also. It is less money for them to pay." Browne said that it was the first time he has received a scholarship, so "this is special for me. I am sure it helps my family a lot. Sometimes I do not know how they do it. They sacrifice a lot".

And Haynes pointed out that although his father was not a professional bass guitarist, awarding the scholarships to students playing the instrument is not outside the foundation's scope. There have been applicants who are music majors, as is stipulated, but were not guitar majors. "We are not trying to make this difficult, but you have to fit the criteria," Haynes said.