'The Intent 2: The Come Up' - real actors, and real story 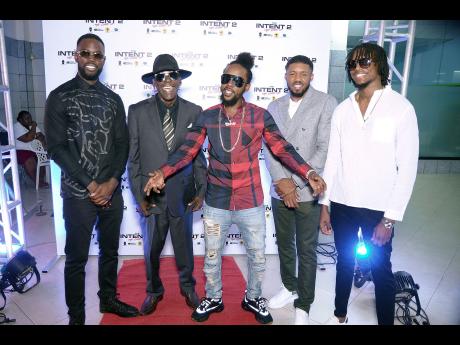 Shorn Hector
Popcaan (centre) with other cast member of the Netflix movie ‘The Intent 2: The Come Up’. From left: Justin ‘Ghetts’ Clarke, Teddy Bruck Shut, Ashley Chin, and Cashief Nichols at the private screening of the film at the Courtleigh Auditorium on Thursday.

If you asked your typical moviegoer how many times they go to the cinema a year, the answer is likely to be counted on one hand.

Of that number, you can bet that the usual suspects will be a superhero movie, the Oscar movie everyone else said they should see, and the film starring their favourite actor. Outside of that, you have a sea of films that go unnoticed critical darlings and independent gems that capture the essence of humanity better than any blockbuster ever could.

That's the goal of The Intent 2: The Come Up. A film that places authenticity above all else, it tells the story of two young orphans, raised by their foster mother in a life of crime. Selling drugs and robbing nightclubs is business as usual for Jay, played by rapper Ghetts, and G-Money, played by Ashley Chin. Their bond as brothers is put to the test when the two, and their crew, must travel to Jamaica in hopes of holding on to the life they built from nothing.

The film features Ghetts, but he's not the only musician making his way into acting. Our very own Popcaan, plays the Jamaican crime lord - 'Soursop', in one of the most gripping performances of the film. What's special about The Intent 2: The Come Up is how it rises above its shortcomings. The film's low budget is noticeable, but only in a few instances. Thanks to the natural performances and authentic dialogue, the film immerses you in the story and gives you characters you not only care about, but can infinitely relate to.

Also in the cast are the writers, producers, and directors of the film, Femi Oyeniran and Nicky 'Slimting' Walker. You'd think that with so much riding on their shoulders, their performances might falter. In truth, the two are on top of their game in every effort.

The Intent 2: The Come Up feels real. It's a film that has a story to tell, about its characters, their environments, and the culture that not only surrounds them, but moulds them. It does all this, in not the prettiest ways - both due to the constraints of the budget, but also in its subject matter. It doesn't shy away from the ugliness that surrounds the two countries it's set in, and places it under a microscope. When it comes to authentic storytelling, the intent is certainly there. And it shows.