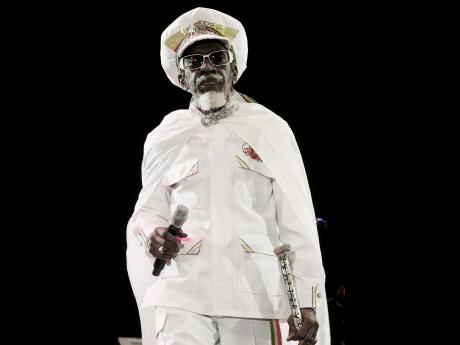 Four weeks ago, 71-year-old reggae icon Bunny 'Jah B' Wailer suffered a minor stroke. But according to his manager Maxine Stowe, "despite the situation, the entertainer is not showing any signs of dismay", she told The Gleaner.

Stowe told The Gleaner that it happened after the reggae icon spent the day visiting his Portland farm. On his return to Kingston, it was noticed that he was having problems communicating.

The stroke occurred on the left side of his brain, which she says resulted in the right side of his body being affected. "He was actually relaxing when he had it (the stroke), but as soon as it occurred I noticed the shift in communication and difference in his expression and took him to his private doctor," Stowe explained.

"Thankfully, it was a minor stroke, so it was not as debilitating. Bunny never lost the ability to walk, eat and do other things, although initially, his body was weakened. His speech is the main consequence, and daily, it is coming back bit by bit," she added.

Stowe, who has been working with Wailer for the past eight years, says that despite his current situation, he is even more focused on securing his legacy and that of other reggae musicians. "He has had to watch his peers - Bob Marley and Peter Tosh, among others - die young, leaving their estates in the hands of someone else, but he has lived his life and is working effortlessly to ensure the future of reggae music is secured," she said.

The only surviving founder member of The Wailers (which also includ-ed Bob Marley and Peter Tosh). Stowe revealed that Wailer has spent the past three years paying more attention to sales and establishing spaces dedicated to the promotion of reggae and its contributors and less on touring and performing. He has already launched the next phase of the Wailer's experience in Nine Miles, St Ann, and was recently at the Bournemouth Beach and Bath facility - a place that the veteran has stressed is significant to the development of not only his musical career, but the likes of the Skatalites and Mystic Revelation of Rastafari.

Speaking to The Gleaner about his father's recovery, Abijah 'Asadenaki' Livingston said it has been an eye-opening experience. "When I found out, I really did not have any time to have an emotional response - I just had to get to the hospital to provide support because if there is anything my father feeds off, it is positive energy," he explained.

Rarely leaving his father's side, Asadenaki says that the goal is for him getting stronger so he can continue the work.

"A major part of securing his legacy is to know what the legacy is. My partner and I have spent a great amount of time to bring that story to life, and The Wailers Museum was another one of those steps, but, of course, with everything, he has to tell the story. So, the speech therapist is helping him to enunciate and get the words out."

He says that the family is optimistic that he will be able to speak as he is in full recovery mode, and remains focused on his legacy. The launch of the Wailers Statue development event is a continuation of their effort. It was slated to take place on National Heroes Day, but they were forced to postpone following Wailer's stroke. The new date for the event is December 2, and the launch will be led by acclaimed sculptor Paul Napier, who produced the Marcus Garvey Liberty Hall statue.