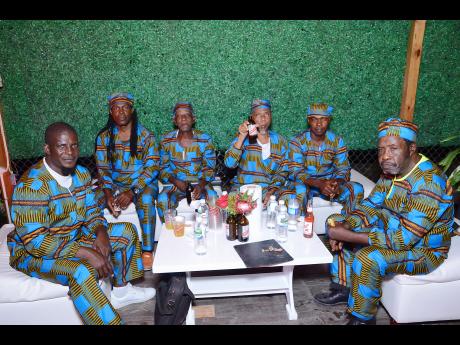 Shorn Hector
Blue Glaze, who adds a ska beat to the EP with their opening number ‘Sweet Jamaica’. 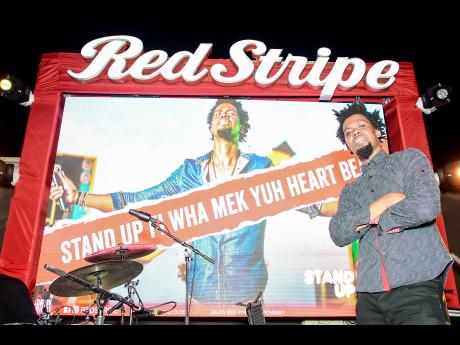 Shorn Hector
J-Summa, whose song is the sound track for the new commercial.
1
2

After its official launch in July, to celebrate Desnoes and Geddes (D & G) 100th anniversary, Jamaican radio airplay for The Journey With Stripe EP has been far below what its funders had hoped for.

Nasha Douglas, senior brand manager for Red Stripe global, domestic and international brands, told The Gleaner she feels "if a producer had produced it and sent it in, it would be picked up much easier". That level of support was distinguished from what happens "when a company produces an album".

She continued, "We have been trying. We have been trying with different stations. I do not know why it is not getting the necessary airplay." Still, the company presses on with the outlets it has, including placing the songs in the digital domain on its various channels.

Douglas would not specify how much money was spent on the project, but noted, "it was a significant amount, and I think it is important we invest in Jamaican music." The Red Stripe brand's connection with Jamaican popular music includes singer/songwriter Ernie Smith's early 1972 Life is Just for Living, w\hich started out as an advertising jingle, and then became a popular song, It was remade for Christmas 2016 with Smith, Wayne Marshall and Mystic Davis.

Douglas says the company's connection with music "is integral. Red Stripe has been involved in music for so long. What we are trying to do now is put structure in the process, so it goes beyond the people who work here today. It must last for the next 100 years".

The Journey With Stripe is interlinked with the youth-focused We Are Tomorrow initiative, which is slated for summer 2019. Douglas says music producer Pablo Stennett approached the company about We Are Tomorrow and the dialogue developed into his helming Keeping It Up with J. Summa for Red Stripe's 'Stand Up For Your Stripe' branding push. The EP developed from there and Douglas notes that Stennett had full control of the project rather than making it a branding exercise. "I did not want it to be about that. I wanted it to be about the music," she said.

The sole direct brand reference in Fun Time Again with singer Christopher Martin was his idea, Douglas said. "He said it was a natural thing to do it."

he seven-track EP, The Journey With Stripe, is a surprise of the pleasant variety. First of all, for its lack of overt marketing messaging about the company which funded the project. The Journey With Stripe, celebrates a century of Desnoes and Geddes Ltd (D&G), with Jamaican product Red Stripe beer as its premier brand, so the reason for the EP's existence immediately raises expectations (fears, even) of many a drink brand reference and thinly coated urgings to consume them.

Happily, this is not so - the sole outright occurrence is in the second track, the ska song Fun Time Again, when vocalist Christopher Martin encourages "the mission is always to bring back the love/So lift up your Stripe and drink up". And that brand reference does not sound forced.

The second surprise is also related to the reason for the first, as company-funded forays into popular culture can come off as cheesy as the locker room of an underfunded football team, where socks have to be pressed into service more quickly than they should. In this case, it is not so. From the ska opener Sweet Jamaica, with Blue Glaze Mento, Band chortling the warning "if we abuse it, we're gonna lose it/And if we lose it we just can't get it back", through to the uptempo dancehall close Feel The Vibe,with Agent Sasco advising "so any time when you buck up pon a pretty gal, country or city gal, you haffi know whe fi gi de gal". The Journey With Stripe is good music.

Still, there is some emphasis on the party scene, which goes hand in hand with D & G's products, Sasco deejaying "Caribbean fun, drinks an sun, pure gal a wine up, nuff like san". Keeping it Up, with J-Summa (the song for Red Stripe's most recent commercial), sets a party scene with the opening lines: "it seems we're getting started/It feels just like a party/It's time to get in the zone". If you did not get the message from the title - JA Party, deejay Tifa reinforces it with the lyrics "me an mi fren dem a gwaan so nice/Vibes right inna dis ya beach party".

Ed Robinson's reggae song Neva Give Up and Tosh's

'I'm Done move away from the party -hearty trend with encouragement in the face of life's challenges in the former, and finally relinquishing a disappointing love in the latter. Thematically, along with Sweet Jamaica, they provide a balance to the party focus.

Although The Journey With Stripe marks a century of a company founded in Jamaica, D & G has not been actually Jamaican owned since the 1990s, and the flagship beer is truly international. The EP reflects these factors, as there is more than a healthy tinge of EDM and, although the vocals are distinctly Jamaican - the outright reggae, ska and dancehall apart - the music defies immediate categorisation.