Kuzikk ready to make their mark on local industry 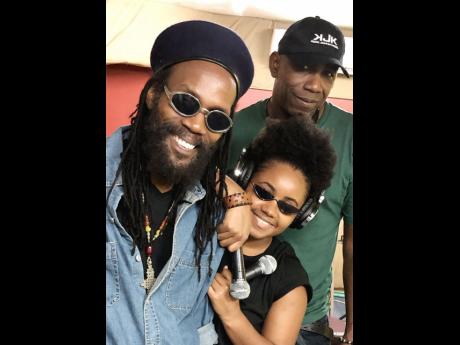 A new music group is on the rise on the local scene. The group, which consists of Kool Johnny Kool, Krysi Webb and Kamau Imhotep, go by the name Kuzikk, and they believe they have what it takes to be the next big thing out of Jamaica.

Speaking with The Gleaner in a recent interview, each member of the group expressed how their individual paths in music led to the formation of the group. They explained that even though they each have to focus on their solo careers, there was no denying how well they worked as a unit, and how much the music they created together could positively impact the nation.

"We found that the synergy between us was seamless. It was effortless to come together and just sing and hold a vibes. Because of that, people have been saying for some time now that we should just form a group, come up with a name and touch the road together," Imhotep explained. "We did that and we believe we will be a real force in music."

"We all have personalities that are similar, and as Kamau mentioned, the synergy between us is great, so we operate well as a unit. We have something that not only comes easy to us, but it's amazing the kind of music we create together," Webb said.

Although their material will be mostly reggae, the group refuses to put their music in a box. They note that as creative individuals, there are times when they will need to switch things up so their material resonates with the intended audience. "We do reggae, dancehall, international. We're musicians - so we do a little bit of everything, we don't have limits," said Imhotep.

However, Kool Johnny Kool made it clear that although they may dabble in dancehall music occasionally, they will not be indulging in lewd lyrics. "Even though we're saying that we do a little bit of everything, including dancehall, it's clean dancehall. We don't do the kind of dancehall with lewd lyrics. We do clean, positive music that uplift the people."

The group is currently promoting a track called Do it Again. It is the first track that the group will be releasing as an official unit. The song has been out making the rounds on local airwaves and the group just wrapped up filming for the official music video. The video is slated to be released before the end of the year.