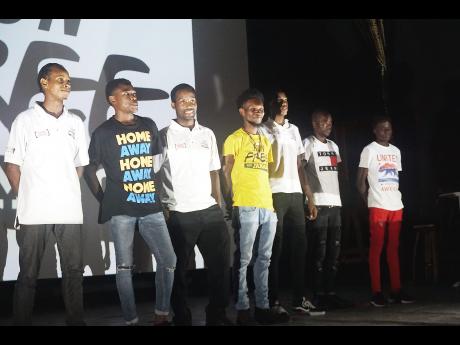 Marcia Rowe
The cast of ‘Run Free Jamaica: The Documentary’ 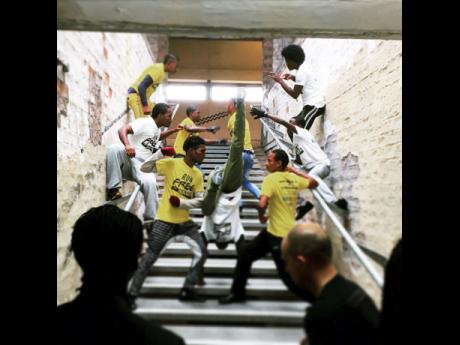 Contributed
Run Free participants from Parade Gardens, Kingston, executing a parkour-inspired tableau captured by Scottish media ahead of the debut of their theatre production at the Home Away Festival. The performance, which took place in one of Europe’s leading visual and performing arts centres, Tramway, Scotland, was the climax of their story captured in ‘Run Free: The Documentary’.
1
2

A crucial component of Run Free: The Documentary is parkour, or 'running free'. The documentary is the end result of the Run Free programme, organised by Manifesto Jamaica in conjunction with British Council Jamaica and the National Theatre of Scotland.

The documentary, which was screened last Friday at Hope Zoo, follows 11 youths from Parade Gardens who were involved in the programme through their parkour training.

In 2012, a representative of the British Council travelled to Scotland and saw a Jump production put on by the National Theatre of Scotland. Behind the staging of the production, inspired by parkour, was Simon Sharkey. Sharkey explained, "The physical aesthetics is what attracted me to it (parkour). It was created in France by a group of young migrants - they wanted to overcome obstacles in a powerful way, making themselves useful by being strong to their community."

He continued, "Chris Grant started a parkour organisation in Glasgow at the same time I was looking for a vehicle to be able to engage young men. I used to do what we called 'the jumps' when I was younger, so when I saw parkour beginning to rise again, I became interested.

"It's almost like a dance, it is almost like martial arts, it's a thing in its own and has a philosophy behind it - everybody starting together, finishing together, being strong and powerful so that you are useful to your community."

Creative director of the 45-minute-long play Run Free, Brian Johnson, did not know about parkour before his involvement with the project. "The challenge was to transfer parkour training to the stage. The young men had to jump over boxes, metal frames - the objects became a part of the story. At the beginning, the objects were the corner on their streets; they became their homes and then became unfamiliar objects (a new environment). In essence, they used their imagination to creatively transform those parkour pieces to that which was relatable," Johnson explained.

The group travelled to Scotland to stage their production. "In Scotland, they saw the result of the training being manifested. The performance in Scotland was mind-blowing. We did not know what to expect, we did not know if the audience would understand what was being said and done. So, in rehearsal, we paid attention to the physical forms and emotion, and the audience received the content very well," added Johnson.

Participants Shasane Parker and Daniel McGillbary are two of the beneficiaries of the parkour training. Parker said the experience has helped him to develop into a better person who is now able to help others.

"I appreciate art much more. I use to just look on the music part of it and the dancing. But now, I realise that it covers the painting, the drama, movies, and theatre. From the beginning [of the project], I saw myself growing. Right now, I am helping younger persons in primary school with prevention of sexual abuse ... through theatre."

McGillbary said he was grateful for the chance to tell their stories. "I have grown a lot from the experience. I've learnt that rather than try to use aggression in certain situation, use positive energy to quell it. I have become a wiser man."