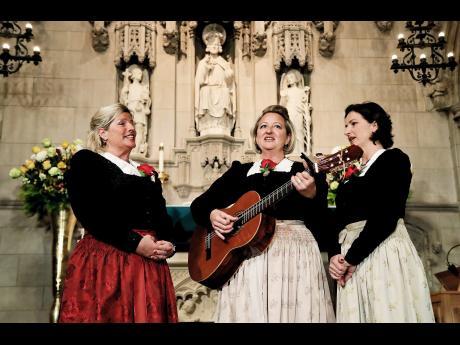 Julie Jacobson
The Kroell Family Singers (from left): Gerlinde, Elisabeth, and Christiane, sing Christmas Carols during a celebration of the song ‘Silent Night’.

One of the most famous songs of Christmas was celebrated Tuesday as it approaches its 200th anniversary, with a concert at the New York City church where Silent Night is believed to have been sung in the United States for the first time and where a priest was the first to publish an English translation of the Austrian carol.

The performance of the carol by Austria's Kroll Family Singers and ensembles from Trinity Church took place at the Alexander Hamilton memorial in the Trinity churchyard. The singers stood in front of the memorial in the darkened yard as onlookers gathered and horns from passing cars beeped on nearby streets.

The Kroll singers opened the carol with verses in the original German, followed by the Trinity singers with verses in French, Spanish, and finally English.

The song resonates with people because of its simple melody and straightforward message, said Elisabeth Frontull, a member of the Kroll group.

"You sing it from the bottom of your heart; that's the reason why the song is so popular," she said.

Organisers of the event said it's believed the song was first sung at the Trinity Church location in 1839 by the Rainer family singers, a travelling singing group from Austria.

Silent Night initially debuted as a musical piece in December 1818, with words by Joseph Mohr, a priest, and music by Franz Xaver Gruber, in Oberndorf, Austria.

In 1859, a priest at Trinity, John Freeman Young, published the first English translation of three verses of the carol, including the well-known first verse that ends with "sleep in heavenly peace".

It has become one of the most recorded songs in the world and declared as part of Austria's cultural heritage.

To mark its anniversary, Austrian tourism organisations put together a number of events in that country, including concert and exhibitions.