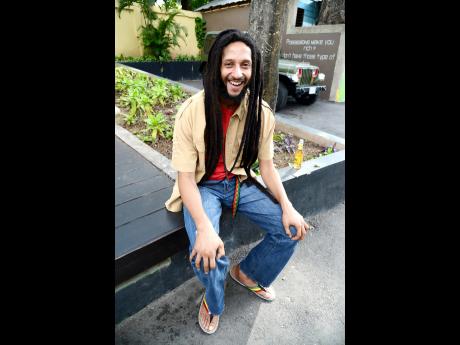 Reggae singer Julian Marley, is putting final touches to his upcoming album - As I am. Slated to be released in January, this will be Marley's fist album in almost a decade. Speaking with The Gleaner after a captivating performance on the Welcome to Jamrock Cruise, the singer said the public can expect something that is not out there, a unique album tailored to uplift and inspire.

"Its an upbeat album, every song is different. In addition to dancehall, there are hip hop, funk and roots, and will feature other artistes like Beenie Man, Spragga Benz, etc. It is called As I Am because each song represent something about me. Each song is different, and it shows my love for different genres of music," he said.

As I Am comprises 17 tracks and features songs like You Are the One, Broken Sail, Chalice Load and Papa.

Comparing his upcoming project with his 2009 album Awake, Marley said both are somewhat different.

"It's a new day, basically everything is just brand new, and this is done by daily inspiration. For me, it has a more up-beat tempo than Awake. One will have to listen the album to feel it.

Produced by Tuff Gong, Awake won Best Album of the Year in the International Reggae and World Music Awards in New York. It also received a Grammy nomination for Best Reggae Album.