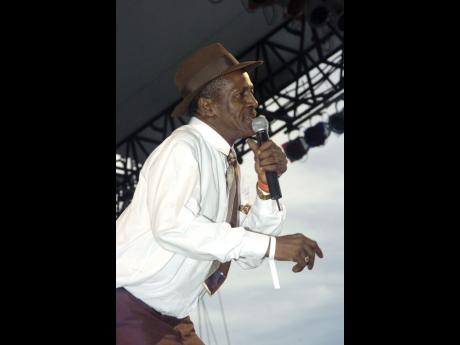 One morning, June Isaacs woke up to a pleasant surprise - literally - from her husband Gregory. He was playing his guitar and singing "I woke up this morning to a pleasant surprise". It was the beginning of the R&B song Too Good to Be True, which begins the late singer's 1989 album IOU, released by United Kingdom label Greensleeves.

She heard the song come together over a very short time span typical of Gregory's writing process. "Gregory is a man who wakes up humming one or two lines," she said. He would retain those lines and keep adding until it was time to record. "No pen and paper. He was very witty like that," June Isaacs recalled. "Nothing took Gregory long. You could wake him up and drive to studio, and in between the house and the studio, he would have a song."

Among the lines from Too Good to Be True, which June would have heard Gregory add, was one that could have referred to her as he eventually sang "she was sleeping with a smile on her face". Then, in the chorus, Isaacs expresses the wonder and delight of someone emerging from sleep to very welcome - but maybe unexpected - companionship:

"Oh it seems too good to be true

I can't believe I'm waking up with you

June believes Too Good to Be True could have done much better than it did in terms of popularity and adds, "many people don't know it is Gregory," because it is an R&B song and not the reggae to which they are accustomed from him. However, she notes that it is not Gregory's only R & B song, with After Smoking My Last Cigarette, among others. She identifies R&B as being among his favourite of the musical genres Gregory Isaacs listened to, with balladeer Smokey Robinson of Cruising fame among his preferred singers for "his coolness, his style".

With R & B's lyrical forte being love and expressiveness, June points out that most of her husband's songs are in that vein, "but the beat is reggae".

Gregory Isaacs' romantic connection went beyond music to books as he had an affinity for novels in the famed Mills & Boon series. "He read a lot of Mills & Boon. He always had one in his back pocket, and a little dictionary and a Bible (small New Testament). Sometimes you see him back pocket fat up," June said.

In her husband's R&B vein, next month's Red Rose for Gregory concert, an annual celebration of his life and the Valentine's season, will feature American R&B singers Peabo Bryson and Regina Belle, along with a tribute to Gregory featuring Roots Radics Band. The American singers will also have their bands, and Fab Five will perform with Boris Gardiner, whose I Want to Wake Up With You is a lover's rock standout, much as Isaacs revelled in the softer side of reggae.