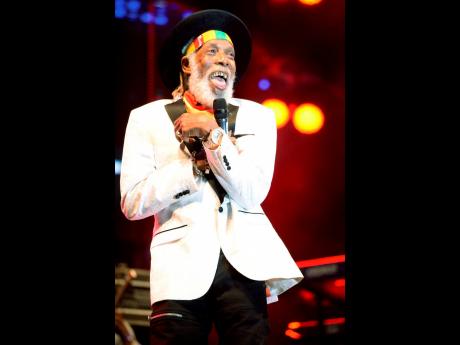 Veteran deejay Big Youth says he was not surprised when British rock group, The Who, contacted him last year for a collaborative album. According to theTipper Tone Rock toaster, the band members have long admired his music.

“These people rated me from in the 1970s ‘cause how me change things with my whole punk rock style of deejaying, so I’m these people favourite,” Big Youth toldThe Gleaner. “They work with a lot of people but me and dem have a connection. They wanted to go all out and make music within the rock, reggae, rock and roll genre, so the drummer Zak Starkey reached out to me.”

One of the most celebrated rock bands in the 20th century, The Who, formed in 1964, is known for chart-topping rockers like I Can See for Miles,Who Are You and See Me, Feel Me.

Starkey, son of legendary Beatles drummer Ringo Starr, joined the group in 1999 and will be producing the project, which is slated for release this year.

“I am the writer for most of the songs. We have songs likeFacebook Lover andParty At Mary’s Place on it. There’s people like Sly and Robbie, and Jackie Jackson playing on it as well; it’s a big project,” Big Youth said.

The deejay said the recording for the album started last year and it is currently being mixed for release on British label Trojan Records. Big Youth has a rich history with the label, as it released his acclaimed debut album Screaming Target in 1972. The 12-track set was produced by a then 20-year-old Augustus ‘Gussie’ Clarke, and set the precedent for the art of deejaying, a style earlier introduced by U-Roy. The album catapulted his career in the British and European markets, which he hopes to mimic with the collaborative effort.

“I’m already in the rock and roll punk world. This album should make me even more known in that genre.”

That aside, Big Youth is also working on his own album,Cultural Icon, which he said will host 11 to 13 tracks of “real, authentic reggae”.

Even though he believes music does not generate sales without a major label or touring, he said his motivation for recording new music is “to let the world know that Big Youth is still active and still good at making music”.

“If I put new music on iTunes it’s not going to sell, but if I go out there and tour and expose the music, then I’ll make a profit. It won’t be a lump sum, but if the music is something of substance you’ll continue to eat from it.”