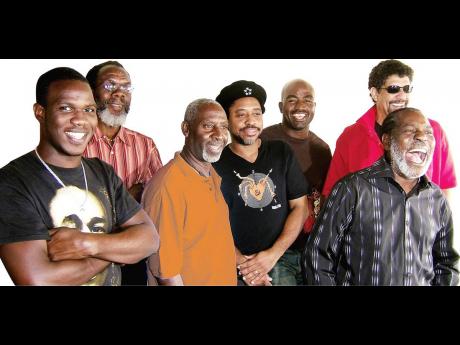 The members of Chalice.

“All I want is peace and quiet

But outside they’re making a riot

So I’ve got to save myself from harm

I want to hear my radio playing

But instead some guys are saying

That there is no reason for alarm

Could never stop the ganja man from buy out the bar

Yellowman and Tiger Man and the one called General Trees

Take over the world

Keith Francis created and presented Wayne Armond with the bassline forDangerous Disturbances, but it was music pumping from sessions in Half-Way Tree, St Andrew –entertaining as well as disturbing – that gave the Chalice vocalist and guitarist the lyrics. That niggling, combined with the mutual shock of a band of seven Jamaican baldheads and a club full of Caucasian Rastafari in Munich, fused into a tune testifying to the power of Jamaican music and culture.

“I live about 300 yards from Half-Way Tree as the crow flies. You used to have a dance go on at King’s Plaza,” Armond said. He would sit on his verandah and enjoy the ‘early warm’ of roots reggae and lover’s rock, but at about 2 a.m. when the dancehall really got swinging, “you can’t sleep.” The website www.discogs.com, lists the vinyl single as being released in 1984 on the Pipe Music label, andDangerous Disturbances as included on the 1987 RAS Records albumUp Till Now.

In the song, Armond lists some deejays who were “hot at the time”, among them Yellowman, with whom Chalice would later collaborate on two songs – one a remake ofPeeping Tom with Toots Hibbert and the other,Bouncing Around the Room. He also singles out singers Mallory Williams and Dennis Brown as voices of another session, Rae Town dances with Klassique sound system. Producers were not excluded as Armond wrote “Dangerous disturbances everywhere/Blame it on the Sly Dunbar and Robbie Shakepeare”.

The shock of just how much Jamaican culture had spread throughout the world came in Munich, Germany. “In May 1983, when Chalice went to Europe for the first time, we played in a club that held about 350 people,” he recalled. Chalice was given the wrong introduction of being from Trench Town, the assumption in the wake of The Wailers that Trench Town was the base of just about every Jamaican reggae outfit. The lights came on and the audience stared at “seven bald head man” who were equally shocked to see “350 white Rasta”, whose clothing included Clark’s shoes and ‘gun mouth’ pants.

The show went on, the shock passed, and the awe of Chalice took over, to the extent that they not only played three more nights there, but during that six-week stint in Europe, they were invited back to Munich to play in a 2,500 capacity hall.

Dangerous Disturbances was recorded in a period when Chalice’s studio base was Dynamic Sounds, Armond saying that it was one of the songs on which they had a consensus from the get go. The band did not get to playDangerous Disturbances at Rebel Salute 2019 last weekend in Priory, St Ann, although it was in the set list. “We had two songs planned for an encore, but when we were coming off, the stage manager said do one more. We ended up leaving it off,” Armond said.