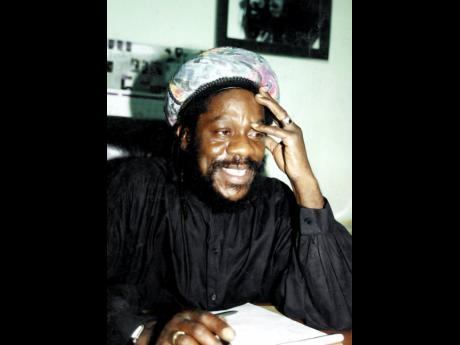 If Dennis Brown was still alive, how would he have spent his 62nd birthday today?

According to his friend and neighbour Jane Sinclair, he would be treating others.

“When he was in Jamaica, him would come and celebrate it with the kids and give them gifts even though it was his birthday,” Sinclair told The Gleaner. “Him would even buy us KFC and take us to the studio or down by Oceana Hotel and treat us instead.”

Long described as a sweet, ­giving soul, the ‘Crown Prince of Reggae’ was born on Orange Street, where he lived with his parents until his mother died. His father, Arthur Brown, was a notable comedian and actor, and the apple did not fall far from the tree as young Brown had a knack for performing.

At nine years old, he would stand atop beer boxes during Byron Lee and the Dragonaires concerts and soon caught the attention of venerable producer Clement ‘Coxsone’ Dodd. Four years later, he released his debut album, No Man Is An Island, which cemented the crooner as one to watch in the eyes of many, including reggae legend Bob Marley.

“Even though he was a child, it wasn’t odd to have him in ­parties and studio singing ­because Orange Street is a street of ­musicians, and there were ­record shops all over the street. Bob Marley had a record shop, Coxsone was there, Prince Buster, too, and Dennis’’ father was supportive of him doing music,” Sinclair said.

It did not take long for the world to recognise the silky, melodious voice that belted through records like Money In My Pocket, the 1977 single that landed Brown his first crossover record on the UK Top 10 chart. He is also lauded for recording an average of seven albums per year, and more than 80 albums in his 30-year career. His catalogue boasts timeless records like Silhouettes, The Promised Land, and his classic opening number, Here I Come. Regardless of his growing fame, Sinclair said he never forgot his roots. “When him get big, him did move to Patrick City, but he was still always here inna Orange Street ‘Big Yard’,” she said. “Even when him leave Jamaica and gone a foreign and come back, is right here him come first and give everybody a small change.”

In 1994, Brown received a Grammy nomination for his album Light My Fire, but his own light was coming to an end. The singer died in 1999. He was only 42 years old.

Veteran producer Lloyd ‘King Jammy’ James referred to Brown as a brother and remembered the moments leading up to his death.

“Before he died, when he was sick, I was abroad and he was ­trying to get in touch with me,” he said. “I don’t know for what ­reason, but he wanted to talk to me ­before him go, and I couldn’t get any link with him, and by time I got to Jamaica, he was already gone.”

Their last studio session was in early 1999 and birthed You Satisfy My Soul, which appears on James’ 2018 tributary album King Jammy Presents: Dennis Brown Tracks of Life.

“He always visit me when he is in Jamaica, and him always want to record for me,” he said. “Our chemistry was always great. He is such a creative man, and we don’t just voice one song for the night. We voice all four, five songs for the night and we don’t stall it. We just play the riddim and write the words right there on the spot.”

Deejay Big Youth first met Brown when he was a child and said his impact can never be erased.

“What he has done is so ­profound that he is always with us. Even though he is not alive, his music makes it seem like he is still here.”

“I know the Jamaica Cultural Development Commission is ­having a ceremony at his burial site at National Heroes Park this morning,” he stated. “Hopefully, we can have an after-party in the night between Charles Street and Orange Street for him and have some sounds playing his music.”

Douglas said plans are still being finalised for this year’s concert, which is slated for February 24 at Kingston Waterfront.