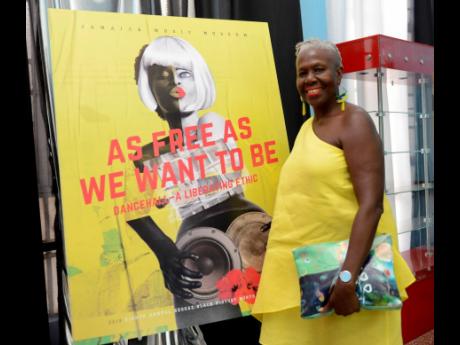 The Jamaica Music Museum’s Grounation series for Reggae Month continued on Sunday under the broad theme ‘As Free as We Want to Be – Dancehall A Liberating Ethic’, with the discussion centred around the sub-theme ‘Dancehall Stardom Version 1: Crime, Justice and Punishment’.

The stage was set, and, as the actors took their seats, the not-large-enough audience inside the Institute of Jamaica’s Lecture Hall on East Street in Kingston could feel a ripple of excitement. The panel had been accurately described by moderator Dr Lisa Tomlinson as “heavyweight”, and it featured the likes of Dr Sonjah Stanley Niaah, director and senior lecturer, Institute of Caribbean Studies and Reggae Studies Unit, The University of the West Indies (UWI), Mona; Dr Donna P. Hope, professor of culture, gender and society at UWI, Mona; Michael Dawson, co-writer of six Oliver Samuels plays, as well as co-author with Vybz Kartel for the bookThe Voice of the Jamaican Ghetto; and artiste manager, booking agent and event promoter Junior ‘Heavy D’ Fraser, who informed the gathering that he has played a role in the careers of most, if not all, of the artistes who have gone to prison.

In a wide-ranging discussion, they touched on the perception of dancehall as the music of violence and criminality, and which is played in a “criminal space”. They put forward various theories as to why this “wrong assumption” has been held on to firmly throughout the years, and pointed out that violence in Jamaica predates dancehall, which has only been in existence since the 1980s.

“Jamaica is a very violent place and this was happening long before dancehall. If there are 1,500 murders in Jamaica in a year, then probably one or two dancehall artistes may be involved, but dancehall going to be blamed for everything,” Heavy D said, adding, “All now dem can’t find anybody to blame for the mess at Petrojam, but they are ready to throw the blame for violence on dancehall.”

They also discussed the protagonists who, having been caught on the wrong side of the law and incarcerated, somehow end up being revered and uplifted to folk hero status upon their release from prison. According to the panellists, this forces one to ask the question: Does incarceration equate punishment? Of course, certain names were thrown out, among them Ninja Man, Jah Cure, Vybz Kartel, and Buju Banton.

Hope made a case for artistes who are ill-equipped to deal with the rigours of sudden success and the expectations that come with this, added to which, they don’t see themselves as role models, especially to a whole generation of persons who they don’t even know.

She painted the scenario of an artiste who has been toiling in the studio hoping for a ‘buss’, only to wake up one morning to find out that one of his songs has hit the jackpot, and he is totally unprepared for the demands of this new lifestyle. She drew a parallel, in sports, to when the Reggae Boyz qualified for the World Cup and many of them had to be given etiquette training because they “did not know how to eat with a knife and fork”.

The panel concluded that whereas in the sporting arena there is a mechanism in place to train the players, there is no such system in place for the dancehall artiste, and so, he is left to his own devices with more money than sense.

Heavy D pointed out that the biggest hurdle in helping an artiste is trust, or lack thereof. “The artistes want to trust somebody, but the people around them, who are in no position to assist them with their overall betterment, convince them otherwise. If I am in it for so long and they still don’t trust me, then I don’t know who they are going to trust,” he declared.

The panellists, however, all seemed to agree on one thing, that dancehall is demonised because of the grass-roots background of its main players, whose lyrics are a reflection of the side of society that the establishment would rather not confront.

The production closed with performances from dancehall artistes General B, who excited the audience and showed why he and his Monster Shack Crew were such a force in ‘90s’ dancehall; an almost laid-back Erupt; the lyrical Mr Lexx, who gave theFull Hundred; Baby Tash; and 19-year-old singer Pinky Famous, who showed maturity beyond her years with her choice of songPerfidia, which she handled well.