Regina and Peabo thrilled at Red Rose For Gregory 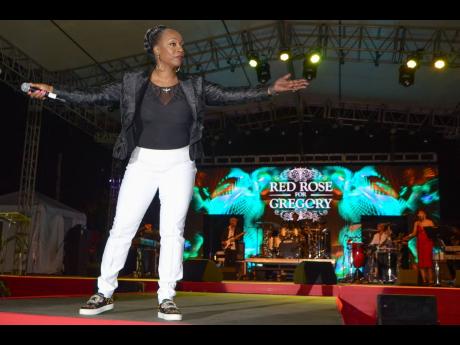 Shorn Hector
Regina Belle performing at the third staging of ‘Red Rose for Gregory’ held at the Liguanea Club in New Kingston on Sunday.

Organisers of the Red Rose for Gregory concert are already in talks with R&B sensation Brian McKnight to headline next year’s event.

“In 2020, we will be celebrating Gregory’s 70th birthday, so we’ll be doing it bigger and better,” Gregory Isaacs’ widow, June, toldThe Gleaner. “We are already talking to Brian McKnight, so plans are in place for next year, and it’s a nice feeling,” she said.

In a near 60-minute set, Belle oozed sultry, soulful vocals as she took patrons on a musical journey that made pit stops at love, fun, and fervour. The audience sang and swayed to classics likeThis is Love, Make it Like it Was, andIf I Could, which she dedicated to parents as she drew closer to the crowd. She also performed her latest song,Freedom, which features Iyanla Vanzant and honours Black History Month. A dancing tribute to the Queen of Soul, Aretha Franklin, delighted attendees, and it was not long before Belle’s contemporary, Bryson, was on stage.

Dressed in a red blazer and black pants, the balladeer serenaded the audience with tracks likeI’m So Into You, Can You Stop the Rain, Tonight I Celebrate My Love, andA Whole New World, for which he was joined on stage by Belle. The Grammy-winning song stood out as a crowd favourite as the entertainers slow-danced.

The event was organised by the Gregory Isaacs Foundation and part proceeds will go to the Patricia House drug rehabilitation centre in Kingston. Isaacs, who passed away in 2010 at the age of 59, was never private about his battle with drug addiction.

“I’m really excited ‘cause I didn’t know that part proceeds are in aid of that. This is a wonderful thing,” Belle toldThe Gleaner. “We are our brother’s and our sister’s keepers so we have an obligation and responsibility and accountability to them. The strong must bear the infirmities of the weak. I am a firm believer in that.”

Bryson also shared his support of the concert’s cause.

“I don’t do it (drugs), but I’ve been around it my entire life and career, so I understand it. I’ve had family members who really needed that help, so it’s personal to me in that way,” he toldThe Gleaner. “In my field of art, it (drug addiction) has always been an issue, and I think it’s because most artistes want a little bit of relief. All Elvis Presley wanted was 10 hours of sleep, so did Michael Jackson – uninterrupted sleep. It’s hard to turn off and come down, so you end up needing help doing it. There’s also yoga, meditation, zen. There are a number of things you can do that don’t have anything to do with drugs, but I’m happy to be a part of anything that provides a system for everyone that needs help,” Bryson said.

He added that he did not have a favourite song from the ‘Cool Ruler’ and appreciated his entire catalogue.

‘HE WAS SOMETHING DIFFERENT’

“When you look at his music, you have to look at the times and eras, and then you can interpret song by song, project by project, how significant the message was in that song at that time,” he said. “I look at it from that point, as a whole. He wasn’t a one-song wonder like so many artistes are. There’s reggae and then there’s Gregory Isaacs. He was something different.”

June Isaacs described how different her husband was.

“If he was here tonight, he’d be smiling. He was a man of few words,” she said. “He’d be happy, just chilling in his fedora.”

His nephew, Rey Isaacs, performed a tribute rocking a fedora, likewise singer Junior Sinclair, who added his touch to Isaacs’ songs includingHard Drugs, Don’t Want to Be Lonely Tonight, andSoon Forward. Japanese saxophonist Megumi paid her respects in a lively, charismatic way, as she did renditions of Isaacs’My Number One, Love Is Overdue, and a special performance with esteemed saxophonist Dean Fraser. The evening also saw the presentation of plaques to select friends and family in Isaacs’ life.