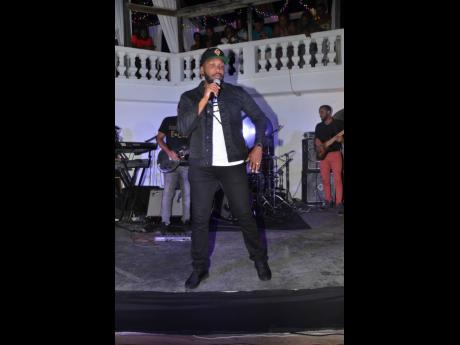 Former No-Maddz member, Chris Gordon, has crossed a lot of hurdles to get to where he is today – an entrepreneur pushing medical cannabis on a strip plastered with some of the quaintest attractions in the tourism capital, Montego Bay.

The broadcast, communication and film graduate, who left the music scene in 2016, is slowly dabbling in one of his greatest loves – showcasing live performances. This he does at his Jimmy Cliff Boulevard Island Strains/2727 Lounge, which he operates with his wife, Maria.

A month after staging what many dubbed a high-energy, electrifying concert with Jesse Royal and Kumar at the lounge, Gordon reignited the strip with Agent Sasco and Charley Black on Sunday night for his birthday celebration.

Hitting the calendar as early as Saturday night at the annual Hanover Charities Sugarcane Ball, Gordon continued with a catamaran party with an intimate group of friends Sunday morning, concluding with a concert that had ragamuffin rubbing shoulders with elegance on the waterfront of his sundeck lounge.

“It has been a lot of hurdles to get here, and it is really great to just have a night of fun and celebrating,” Gordon told The Gleaner, admitting that music, for him, equated life. “That will always be a part of me,” he responded when questioned about his absence from No-Maddz.

“It took a while for me to get back to just enjoying it (music), and now Island Strains is creating a platform to make sure that live music remains a part of our culture, even while ensuring that I play my part in pushing this country forward with medical cannabis,” he argued.

Gordon and his wife, Maria, a Russian-born businesswoman, were the first to open a herb house in Montego Bay and a legal ganja-growing farm in western Jamaica.

From his conversations with The Gleaner, there was no indication that Gordon has plans of returning to the stage anytime soon, although he knows there are people who would love to see him perform again. “I miss my brothers (No-Maddz),” he admits, but he now feels he is in the right position to influence an entire nation through both music and medical cannabis.

Explaining that he works with energy, he said that if he is not on stage, he will bring the stage to the people.

Gordon says, “We are the world’s first waterfront dispensary that understands the importance of keeping it compliant.” That compliance was evidenced in the rich lyrics of Agent Sasco, who delivered a ‘winning’ performance that had the audience hungry for more. Sasco had the large crowd obediently playing the role of choir and every hit he pulled for was obviously among their favourite.

Desmond ‘Charley Black’ Mendez gave an entertaining set, and when he introduced Gyal You a Party Animal, 2014 International Dancehall Queen Jahnoia Christie was prompted to dance on her head in response, though seven months pregnant.