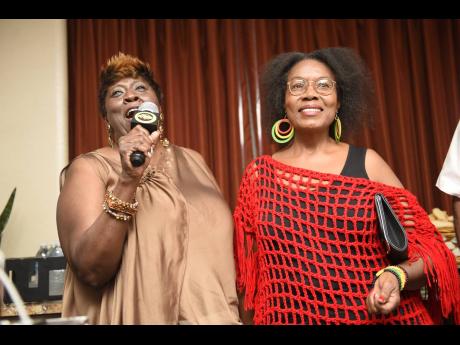 Tarrus Riley, Peter Lloyd, Richie Stephens, Shaggy, Jimmy Cliff, and Pam Hall are among the recording artistes who have contributed to Journey – Break Every Rule, the documentary film on the life and work of the nation’s first female prime minister, Portia Simpson Miller, which premieres today.

Written and produced by veteran film-maker Lennie Little-White, the conversation about the importance of documentaries in recognising Jamaica’s legacy has been brought to the fore.

Pam Hall is featured singing the 1970s single I Was Born a Woman, recorded on music produced by Jamaican pianist-songwriter Harold Butler, which she notes, “Originally, was not part of my performing set until years after it was recorded for the movie Children of Babylon, in which Lennie was also pivotal in the production.”

She says that the song is all the more relevant today for Journey. “The title alone mentions woman, and the lyrics focus on the roles women play in our society. There is no way I could pass up this opportunity to perform it as part of the documentary we all can be proud of – irrespective of what political party a person belongs to because when you get down to it, we’re all Jamaicans.”

Hall added, “The documentary is a move in the right direction especially as it “edutains” rather than just focuses merely on the educational aspect.”

The reggae singer told The Sunday Gleaner that there is a lack of films focused on reggae music and its contributors – past, present, and future.

“The generation of today don’t seem fully aware of our ­accomplishments as a people. Take for example, outside of music – in sports we won medals and broke records in the Olympics while there are countries that have not yet won a medal. Things like these need to be placed in perspective and on record,” she said. “Local ­writers and film-makers need to create scripts that speak to our country’s history and not wait until someone overseas makes that effort, ­especially as there still exists a lot of ignorance about our history from the days of colonisation.”

She says that there are a lot of unwritten stories for the various creative industries and local filmmakers to explore. Nonetheless, the practice, often is to release a documentary on an ­individual that has made an impact on a country’s politics, sports, arts, and entertainment culture long after they are deceased.

“I think the essential reason for a documentary is to commemorate someone’s life, and there is no ­better person to celebrate it than the person that the story is about,” said Richie Stephens, who did the song You’re The Greatest for the film.

Lennie Little-White’s vision, according to Stephens, is a blessing. He names Simpson-Miller as one of his favourite persons, stating, “She has turned out to be one of the biggest champions of our time, and I admire that the documentary shows her coming from humble beginnings to the struggles and all that she has accomplished.”

He continued, “While my role is simply to perform and serenade the former prime minister, I am very proud of that role. Her journey is definitely an inspiration, and it was a great idea to make something of the life while we can all enjoy it,” he said.