Protoje’s ‘Matter of Time’ was worth it 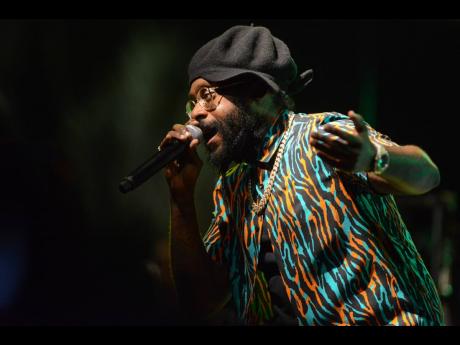 Tickets for Protoje’s ‘A Matter of Time’ live concert, which originally reserved the bandshell inside Hope Botanical Gardens were sold out, not once, but twice before Saturday night. With a larger number of patrons anticipated to attend, the organisers were forced to relocate to Palm Drive on the property.

The minor adjustment did not affect the programme, and anyone who secured a ticket or complimentary pass for the show would agree that the performances met the expectations and the hype was well worth it.

The singer said he was satisfied with the number of persons that attended the live concert, and even recalled the first show he performed at which only had 24 persons in the audience, then 900 and then 1,250.

“The support we have received tonight is a good look for reggae music and music in general. I give thanks that this many people turned up to show love.”

The dance floor was full of life way before showtime, as the persons responsible for the sound system spun a few dancehall mixes to set the mood for what was primarily labelled as an all-reggae artiste stage show.

The stage lit up as headliner Protoje opened the set with the title track for the 10-track Grammy-nominated album, A Matter Of Time. As usual, he was accompanied by the imaginative Indiggnation Band, that infused a few new sounds into the reggae rhythms of the singer’s songs, some which were comparable to rock and roll and had the audience in awe of the creativity.

The first recording artiste to join Protoje on stage was reggae crooner Mortimer, who engaged individuals in a singalong for their collaboration, Truth and Rights. Next up to steal a few minutes of the attention away from ‘King Diggy’ was the soulful Lila Ike as she showed up in a sparkling pants suit. The Second Chance singer put on a slightly shy act for the crowd at first, but was soon after shaking her hips confidently for the cameras.

When the microphone was returned to Protoje, he charmed with an effortless mix of popular tracks such as Like This, Bout Noon, Rasta Love and a cover of Walk Like a Champion – as a sort of tribute to Buju Banton.

Other entertainers who added to the light and pleasurable mood included Tarrus Riley, Koffee, Zuggudan, Agent Sasco and Jesse Royal.

Of course, the show would have been incomplete without the chants of the De La Vega reggae entertainer, Chronixx, performing Skankin’ Sweet and a few lines from the collaborations No Guarantee and Flames, also featured on the album of the moment.