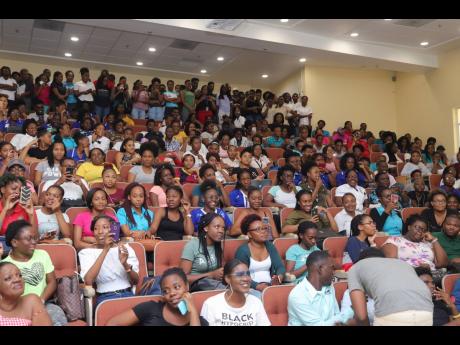 Ever since Spice released her Black Hypocrisy single late last year, she’s had plans of using the song as a catalyst for change. She toyed with various ideas on how to spread the song’s message, as she wanted to make a lasting impact on people particularly, young adults. The ‘Queen of Stage’ then decided that a public forum, where young people would share their experiences with colourism, would be the best way to reach her target audience. The first forum was held at the University of Technology last Monday, and, having seen the success of that discussion, the entertainer has announced that she will be taking the session islandwide in a bid to reach more people.

The Black Hypocrisy Movement, as it has been dubbed, will have its next session in Montego Bay, followed by a stop in Manchester. The dates and locations for the next two sessions will be announced via traditional media and social media. Her team revealed that the format for the other sessions will be the same as the first, and will see young people sharing their experiences with colourism. The sessions are open to men and women. For now, the team’s focus is on colleges and universities, but they are hoping to subsequently include high-school students in the discussion.

Spice told The Gleaner that having been moved by the countless stories shared by young people in the first session, she was convinced one discussion would not suffice. “We have to do this in the other parishes. Just listening to the stories and seeing how interested young people are, is motivation enough for me to want to continue this,” she said.

Cara Vickers, the woman behind the planning and organisation of the forum, told The Gleaner that the movement is something that Spice has wanted to do for months. “Spice has been wanting to do the Black Hypocrisy Movement ever since we dropped the mixtape, Captured. It was just a matter of timing because with her busy schedule she wasn’t home long enough. Last week, she just said ‘let’s do it’ and that was it, it was done. Putting on this project was rewarding, because we know we’ve started something that could be phenomenal. The idea is to carry the Black Hypocrisy Movement around the island, and then around the world, because there are people in America, England and even Gambia (which is where she is right now) that are suffering from colourism,” she said.