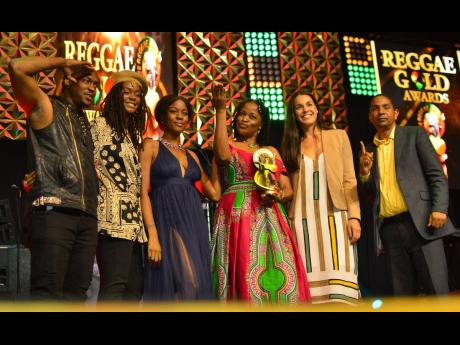 Anthony Minott
Sugar Minott’s children (from left): Daniel, Osunya, Candice and Pashon, pose with Mayor of Gibraltar Kaiane Lopez and Kingston Mayor Delroy Williams, after collecting an award on behalf of their late father at the Reggae Gold Awards, held inside the National Indoor Sports Centre on Wednesday night. 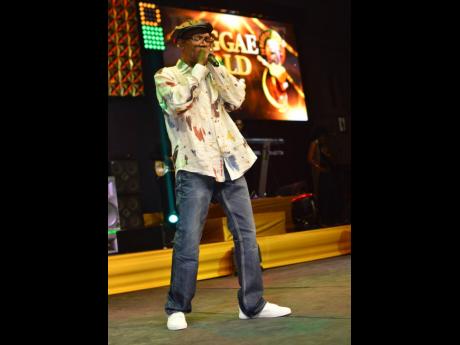 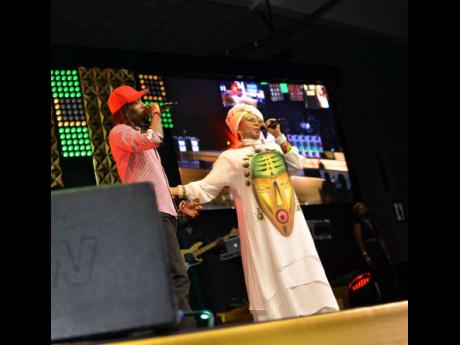 It seems to be a habit to recognise persons posthumously, but it is one that is not easily avoided, Culture Minister Olivia ‘Babsy’ Grange admitted to The Gleaner while attending the Reggae Gold Awards at the National Indoor Sports Centre, on Wednesday night.

The resounding theme at the event was ‘gone but not forgotten’, as several of the reggae icons and contributors who were awarded are no longer with us, but as Grange explained, “For this event, we ensured that a cross section of our artistes, musicians and songwriters were honoured, and most importantly, that a majority were here to receive the awards.”

She added, “The Reggae Gold Awards show was the perfect example of doing better; while we had to pay tribute, we still honoured more while living than those who have past.”

The awards ceremony was set in motion by throwing the spotlight on the first 20 inductees in the Reggae Music Hall of Fame. Former Jamaican politician and anthropologist Edward Phillip George Seaga, recognised for playing an integral role in the development of the island’s music industry, was the first name to be called, and he did show the audience his motion by ‘busting a move’ to ska rhythms played by the Reggae Gold Ensemble.

Among the notable names in the Reggae Music Hall of Fame are: Byron Lee, Sister Ignatius of the Sisters of Mercy and Alpha Boys’ School music teacher, P.J. Patterson, Sonia Pottinger, Millie Small, Reggae Sunsplash for being the first major reggae festival to expose the pioneers of the genre (received by Ronnie Burke) and Rainford ‘Lee Scratch’ Perry, whose award was collected, in his absence, by half-brother Milton Blythe.

The other award categories included the Reggae Gold Honour Awards, Reggae Gold Media Awards, which were issued to nine influential media personalities and one radio station, Irie FM; Jamaica Reggae Gold Icon Awards, which would not be complete without the likes of Clement ‘Sir Coxsone’ Dodd, Robert Nesta Marley, Peter Tosh and Bunny Wailer; and the Jamaica Reggae Gold Awards which had the largest number of awardees covering record labels/stores, sound systems, dancers, producers, artistes’ managers, musicians, reggae bands and recording artistes. In between the distribution of awards, Ken Boothe, Tarrus Riley, Marcia Griffiths and Sizzla kept guests entertained with sessions of singalong and electric slide, where some members of the audience had the chance to join the Queen of Reggae on stage.

Oh, WHAT A NIGHT!

Minister Grange, obviously overwhelmed by the turnout, said, “It’s the industry, the stakeholders that came on board and represented tonight; normally, it is difficult to get these artistes together in one room, but they showed up as humble people although they are stars, danced and rubbed shoulders with everybody.”

Almost speechless, the minister handed out the final award which went to the Double Trouble performer and reggae veteran Beres Hammond. The award show’s headliner wasted no time in getting things rocking away. The show ended as the hands of the clock struck midnight, after Hammond performed a dynamic mix of hits.

“Oh, what a night!” Grange exclaimed. “I am elated, I am happy, and I am satisfied knowing everybody left here feeling good. After the tremendous response, there will have to be another awards show later this year, potentially on July 1 when we celebrate International Reggae Day, as there are so many other persons who have yet to be honoured.”

Before leaving the venue, Neville O’Riley Livingston, one of the Reggae Icon awardees, best known as Bunny Wailer, told The Gleaner, “A lot of credit should be given to Minister Grange, she made it possible. After 50 years of reggae, many of the persons who have contributed greatly have left us, some without even getting any recognition. Most of all, the list of awardees really showed the unified force between the contributors of our musical genres.”

Echoing Bunny Wailer’s sentiments was the family of late singer, Lincoln ‘Sugar Minott’ Minott. According to his daughter, Pashon, “It was really special to the Minott family, as it is the first national award our father has received after being in the business for over 30 years.”

She, along with her siblings Candice, Osunya and Daniel, collected the award on behalf of her father, who passed in 2010.

“The Reggae Gold Awards is our little Grammy Award,” she said proudly.