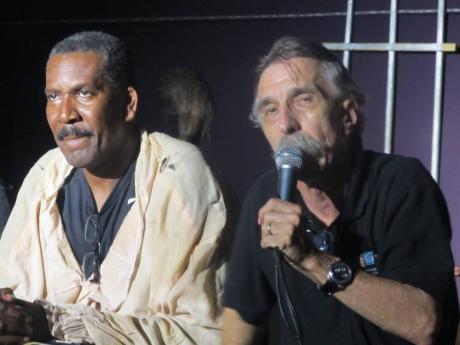 Michael Nicholson, one of Jamaica’s top local actors, who has been branded primarily as a comedian, has taken on the role of a father in the 30-minute television drama Real Friends, which has returned for its second season on Television Jamaica (TVJ).

It is one of those roles, he shares, that was a challenge but was worth the experience.

“The character I play is not what persons would normally expect from me, meaning that I did not assume a humoristic role, and I was not accustomed to playing serious characters,” Nicholson told The Gleaner. “I had to be true to the character, which required me to step outside of what I was accustomed to to maintain the sternness and make it believable.”

The actor stars among other veterans, including Glen Campbell, Sakina Deer, and Nadean Rawlins, also added to the script to play the adults/parents in season two.

For Nicholson, the greatest concern now is keeping the attention of the audience focused on local television.

“Cable television and international sitcoms are not the be-all and end-all; there is a national responsibility to take in more content, as the viewers, cast and crew, directors and producers, for local stations,” he said.

He believes that the talent and essential resources needed to create content for local TV in Jamaica exist, but that the communication between local stations and the various creators is oftentimes unsuccessful.

“When I observe the content directors put into a three-minute music video, there’s no denying that the talent and resources are available. I don’t know what bug is stopping us from taking it and making it to the next level,” he said.

“We should not just stop at recognising past productions, like Oliver At Large and Lime Tree Lane, but aim to redirect the interest to television. Local TV stations must pay keen attention to the material being broadcast and consider investing in content being created locally.”

Andre Wynter, writer/director of Real Friends, acknowledges that there is solid competition with global markets, especially as it relates to the accessibility of worldwide content – from accessing free content on YouTube to paying reasonable fees for Netflix.

This has forced local film producers, like him, to develop new methods, dive deep into creativity, and employ broad-based marketing strategies, like using social media.

“Today, people do not communicate, everyone is on their devices. I would love to harp back to the days of Jamaican television being a big deal, families sitting together for quality family entertainment,” Wynter said.

However, as social-media content creators have figured out how to use the platform to create revenue and transition to theatre and film, as well as music, he says he chose the traditional route.

“I would love for emerging content creators to have a platform to create for TV. That foundation has been set by earlier creators, as Michael Nicholson notes, from the days of Lime Tree Lane, but they are so far and few in-between. If I am successful, I can open doors for those coming next,” he said.