For the Reckord | Reggae Month brought entertainment and introspection 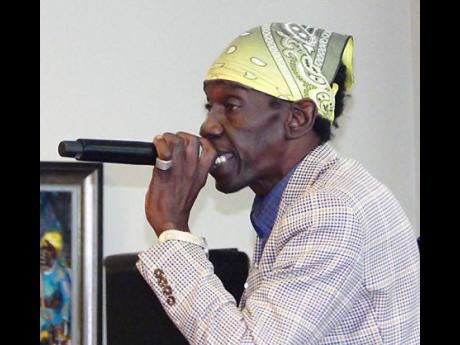 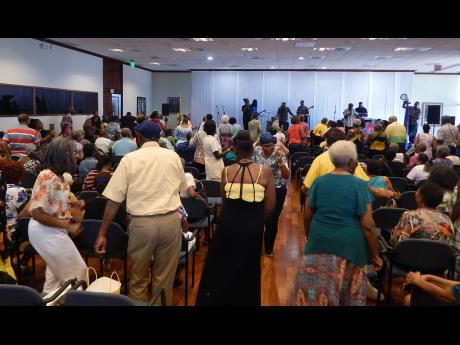 Michael Reckord
The Heptones had the audience dancing in the aisles. 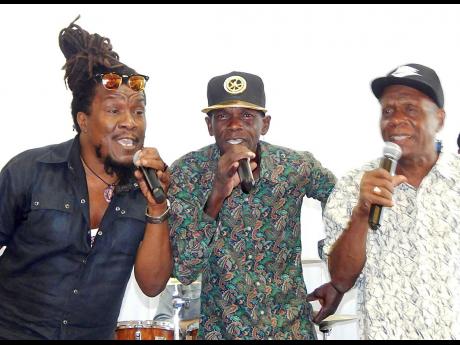 Michael Reckord
The Heptones were a hit with the audience 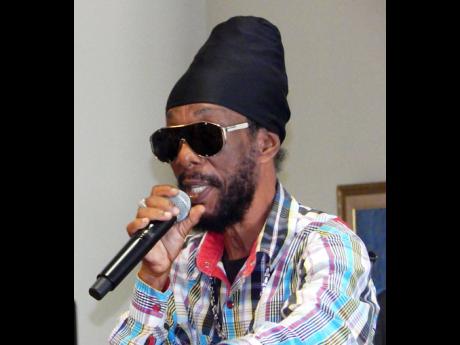 Michael Reckord
Tinga Stewart showed that he still has what it takes to excite the audience. 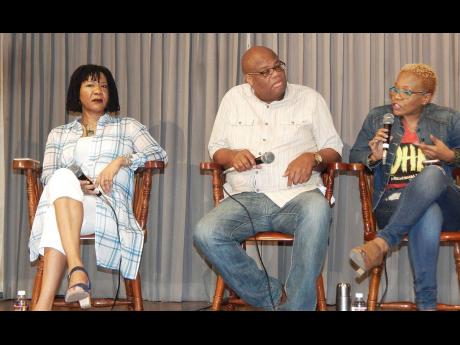 Two of the events that I attended during February – Reggae Month – offered, like the month (as a whole), both entertainment and occasions for introspection. The more thought-provoking event was the Jamaica Music Museum’s Grounation two-part panel discussion on ‘Dancehall Stardom: Crime, Justice and Punishment’, held at the Institute of Jamaica (IOJ). The entertainment came from the Bank of Jamaica’s end-of-month lunch-hour concert.

One of the topics that surfaced at the first of the Dancehall Stardom discussions was the intriguing question of how young, poor, uneducated, but talented artistes deal with the sudden wealth when they get their ‘big buss.’ Some panellists argued that near-irresistible forces push many into unlawful behaviour.

Stanley Niaah said that many Jamaicans treat some incarcerated artistes – for example, the recently released Buju Banton – like folk heroes, adding that rebels against authority have long been revered. “What is it about us as a society that does this?” she asked.

Highlighting the financial power of the entertainment industry, she said that between 2012 and 2016, it directly employed 1.9 million people and contributed some $71 billion to the country’s economy. She asked: With two big dancehall artistes – Ninja Man and Vybz Kartel – in prison, why can’t we have rehabilitation in prison through music? Dr Hope said that the environment that produces many dancehall artistes is also the locus of much crime and violence and observed that in the inner-city environment, it is important that males be assertive, even displaying aggressive traits that easily lead to incarceration.

She asserted that they are going to have friends, brothers and sisters who are criminals. “How do you treat a cousin who is a gunman?” she asked, adding that the ‘newly rich’ have to negotiate with their relatives and friends and won’t abandon them. “We have to find strategies to help them,” she said.

Heavy D’s contention was that while “everybody who started dancehall came from the ghetto”, it is not true that dancehall creates violence, but rather, that dancehall reflects the violence that is in the society.

Dawson agreed, adding that dancehall often speaks to controversial topics that other media do not want to touch. “Do we need it? Yes, it made me know what was going on,” he argued. He agreed that there has to be some training for the artiste who, having taken the bus all his life, is suddenly touring in the world’s biggest cities, where there are lots of money and drugs around.

He said that in the United States, newcomers to the National Football League get a six-week orientation on how to deal with wealth, and he suggested the implementation of a similar scheme in Jamaica. Politicians and the private sector alike use dancehall, he said, but neither provides training for dancehall artistes before they go abroad.

Reggae at the BOJ

Last week Friday, the auditorium at the Bank of Jamaica (BOJ) was packed with people listening to four veteran performers sing to the accompaniment of Ouzo’ne and the Pon Fyah Band. They were Tinga Stewart, Pam Hall, General Trees and The Heptones. Stewart, a Festival Song star decades ago, showed he still had the capacity to excite an audience. His set was one long medley of about 20 popular songs, including Take Time to Know Her, True Believer in Love, The Tide is High, Cover Me, No Weh No Betta Dan Yaad and Save the Last Dance For Me.

Hall also delivered medleys, but in segments divided by conversations with the audience. Her voice was smooth and melodious, with her generating lots of cheers, applause and singing along with Easy to be a Lover, If You Knew How Much I Love You, The First Love is the Sweetest and Perfidia. Later, declaring that the most exciting musical form to come from Jamaica is ska, she sang Wings of a Dove, A Little More Oil in My Lamp, Amen and This Little Light of Mine to a ska beat.

General Trees, the sole dancehall artiste on the line-up, sang two ‘story’ songs, Dog Meat and Where Have All the Jolly Bus Gone, in the flat, harsh tone typical of many dancehall specialists. Though his songs were humorous, the enthusiasm of the audience noticeably dropped while he was on stage.

However, it picked up when the Heptones came on to close the show. Many were singing and dancing in the aisles to the trio’s rendition of We’ve Got to Live Some Life, Book of Rules, I See a Light Come Shining, Sugar Sugar I Need You , and the group’s first hit, So Nice.