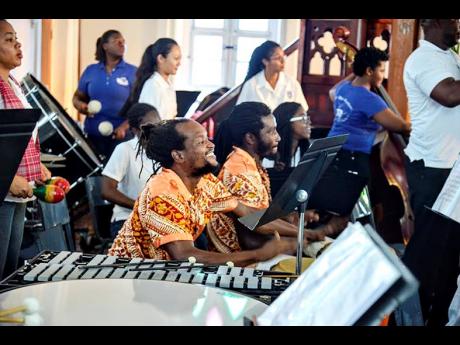 Contributed
The CharlesTown Maroon drummers Moustafa Reds and Padam Delano Douglas (foreground), honorary members of the Immaculate Conception High School Symphony Orchestra, performing at the Abeng Tour’s Morant Bay concert. The Abeng Tour in Kingston will be having two performances at the Karl Hendrickson Auditorium at Jamaica College on March 17.

The first movement of the Kongkongkraba (Abeng) Symphony, a first of its kind, was first performed in a two-stop tour held in 2016. Three years later, the Immaculate Conception High School (ICHS) Symphony Orchestra, still under the baton of veteran orchestral conductor Steven Woodham, will perform the remaining three movements at the Karl Hendrickson Auditorium, Jamaica College, on Sunday, March 17 at 1 p.m. and 5 p.m. The event marks the world première of the complete symphony, composed by Dr Andrew Marshall – who was inspired by the 1739 guerilla war between the British and the Maroons.

Woodham intends for this to be the first in a string of performances of the symphony, calling it an ongoing tour.

“It is a 42-minute-long ­symphony orchestra with ­traditional instruments, Jamaican instruments and choir,” he told The Gleaner.

According to Woodham, after having the ‘world premiere’ of the first movement, Dr Marshall decided to add the additional three – in dedication to the orchestra. “Nothing like this has been done before. It’s an interesting work, dedicated to the students, to the orchestra,” Woodham added.

The Kongkongkraba (Abeng) Symphony is an interpretation of the fight of the Maroons and their subsequent victory, using music to depict a kaleidoscope of sounds. The audience should expect to aurally journey through warlike cacophonies, and soothing hushes and whispers. “The piece is important because it narrates the Great Maroon War in the 18th century. You read about it, you learn about it, but don’t quite get it,” Woodham said.

It is the composer’s, conductor’s and orchestra’s ambition that the complete symphony will effectively communicate the emotion of that struggle for freedom where history books and lessons may have fell short. “It really strikes an emotional note within you. It’s different than reading about it in history,” the conducter assured.

The ICHS Symphony Orchestra has already performed abbreviated movements for a number of audiences – in Morant Bay, St Thomas, and Buff Bay, Portland, and also at a UNESCO conference in Montego Bay, St James.

In 2016, the orchestra counted over 80 regular members, including honorary members from other schools and from the alumni. For Sunday’s performance, Woodham estimates that about 150 students will participate in the orchestra.

The symphony derives its name from the abeng – an important, ­traditional Maroon instrument with its own vocabulary and ­language. Made from a bull’s horn, the abeng was used to send messages across hills and valleys, and to play music. Fittingly, as they did three years ago, the Maroon Drummers of Charles Town will share the stage with the host symphony orchestra. Other works will be featured on the event’s programme, with contributions from the ICHS Glee Club, KC Chapel Choir, the Jamaica Defence Force Band and the National Youth Orchestra of Jamaica.