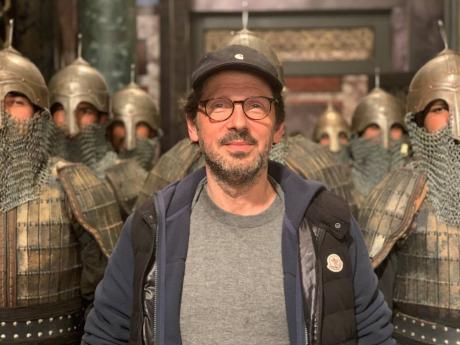 Award-winning film-maker Peter Webber came to Jamaica about two years ago on the invitation of reggae singer Winston McAnuff. They met following an Inna De Yard concert, and conversation flowed into the hospitality that has become a defining characteristic of Jamaicans. Webber, like many familiar with the island, wanted to come, but he was not without reservations.

He told The Gleaner he was scared. However, it wasn’t a stereotypical fear of gang or other violence. Webber was afraid that his experience would be packaged – that he would be treated as a ‘normal tourist’ and not get the opportunity to see the ‘real’ Jamaica.

The invitation from McAnuff was wholly welcome, then accepted. Webber embraced his visit so fully, that the film-maker adjusted his lens to capture what happens Inna De Yard: The Soul of Jamaica.

“I wanted to visit for the longest time, but I was scared. And I will tell you why I was scared; because I had a love of the music and culture – I was worried [that] as a normal tourist, I wouldn’t get to see the real Jamaica,” he told The Gleaner.

Webber’s love of Jamaican culture was born in West London, during the reign of punk rock. “Punk rockers like The Slash loved reggae. So my love of punk rock pushed me in that direction,” he explained.

Jamaican subcultures have been pervasive in England, a result of pivotal historical moments like the Windrush era.

Webber hails his experience as a privilege in witnessing for himself the ‘real’ Jamaica, and to record in his manner alongside musicians spanning generations.

“As a fan of the music, I have that image in my head that I didn’t want to spoil. I’m glad I went with real Jamaicans – not a package. I got to see all the places I heard about in the songs – Trench Town, meeting with the Maroons – getting a proper history of Jamaica.”

According to one of the films prominent figures, Kiddus I, the visual captures the performers’ essence and atmosphere in a way that no other has done before. Recording in the open air with the backdrop of a backyard, the film fuses elements of ska, rocksteady, reggae and dancehall, while weaving musical connections across generations, through the evolution of the Jamaican sound.

“It’s inspiring. The veterans, through all the ups and downs in their lives, realised that the experiences of the younger ones are still interesting … and to see the transition love, playing on top of songs, older guys teaching young guys. It’s a wonderful thing to witness,” Webber said.