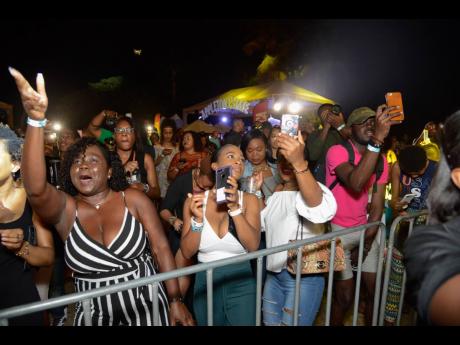 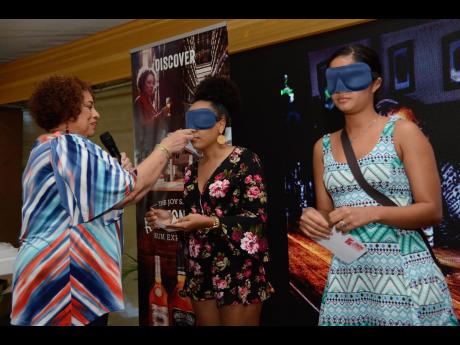 Shorn Hector
‘Guess What’ seems to be the name of the game at the Appleton’s Jamaica Rum Festival Day Two held at Hope Gardens on Sunday.
1
2

Jamaica’s tourism industry can benefit from the addition of the Jamaica Rum Festival (JRF) to its annual calendar of events, and the inaugural staging seems to have put it right in the travel agent and tourist spotlight. According to Valon Thorpe, director of the festival, although an exact final figure of festivalgoers is not yet available, the numbers are already showing that the target set for attendees has been exceeded.

Thorpe notes, “Partnering with the Jamaica Tourist Board (JTB) allows for us to benefit from their international destination marketing machinery, which includes not only the United States, but wider North America, Europe, and South America.”

With that said, the organisers are contemplating the possibility of tapping into the JTB’s base to grow the tourist numbers with each staging, with the potential for satellite launches.Persons came out in their numbers to support the JRF last weekend at Hope Botanical Gardens. It gave a platform for local mixologists, retailers, restaurants, and chefs as well as entertainers to showcase their talents and creativity as the attendees witnessed educational seminars and workshops focused on rum production and its historical importance. It also created a balance with the island’s culture.

Outside of the J. Wray & Nephew Limited rums portfolio, National Rums of Jamaica (Monymusk) and Hampden Estate were part of the inaugural hosting of the festival, and there are also plans to continue the path of inclusivity for all interested local rum brands and companies says Thorpe. “This festival is a national platform for all Jamaican rums, and in the future, we intend to invite other Caribbean alcohol distillers to come on board as our goal is to be the premier spirits festival in the region.”

Senior advisor and strategist in the Ministry of Tourism Delano Seiveright is focused on Kingston as a growing tourism destination, stating that the rum festival adds to its portfolio of projects to improve the visitor numbers to the UNESCO designate Creative City of Music.

“The Ministry of Tourism and its agencies, the Tourism Enhancement Fund and the Jamaica Tourist Board, are actively positioning Kingston as a major tourism destination. Three new hotels are expected to open in Kingston alone this year. The growth of Air BnB has been remarkable, and we also have a cruise ship pier that is being built as we speak that will be ready at the end of the year and will receive its first cruise ship by January 2020,” Seiveright said.

“So as part of our linkages profile, we want to not only bring in small entrepreneurs, medium-sized enterprises, and large enterprises, but we also want to ensure that Jamaican businesses, products, and services are properly promoted and properly linked in to the tourism industry, and this is why we had this rum festival here,” he continued.

Thorpe says that while the ministry is pleased with the turnout, it is maintaining an open mind as it utilises JRF as a platform to promote the overall product that is Brand Jamaica.

“The turnout has been beyond what we expected, simply phenomenal, so we are keeping our mind open about it. This is the first year of the rum festival and the second year of our coffee festival, so you will see the definite trend in pushing the products that we know are internationally renowned, and we are ready to head out into the international marketplace in a deeper way,” he concluded.

Executive Director of the Tourism Enhancement Fund Dr Carey Wallace agreed, sharing that “it makes so much sense to have a rum festival like the Jamaica Rum Festival for tourism; to support all the synergies that rum has with Jamaica’s tourism offerings and more so, I am pleased to see the participation of all the corporate entities, retailers, and rum companies.”

He continued: “We will build on the successes of this year to see how we can enhance it. The rum festival should be like a Mardi Gras in New Orleans, where persons make a vacation plan to be here during that time in order to attend the event. It is like a carnival, and we are moving in that direction to blow it up to that level.”