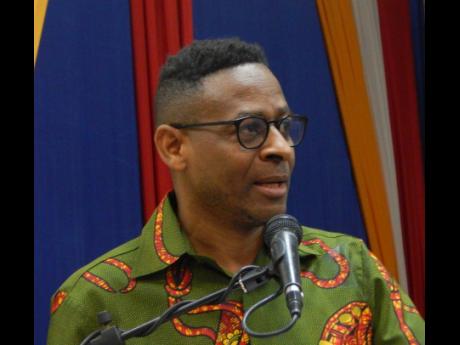 Because March has been designated Literatures in English Month at the University of the West Indies, Mona, numerous activities have been taking place. One was a book launch by performance poet Richard ‘Dingo’ Dingwall on Sunday in the Neville hall Lecture Theatre (N1).

Notice of the launch came the Sunday before, when Dingwall read at the department’s eighth annual morning of readings, dubbed Love Affair With Literature. He was one of five internationally known award-winning readers. The others were Dr Shara McCallum, A-dZiko Simba Gele, Owen ‘Blakka’ Ellis and Dr Erna Brodber.

At his launch, he was one of three who have all performed extensively locally and, to a lesser extent, internationally. Sharing the stage with him were friends Mel Cooke and Yashika Graham. The former has published a collection of his poems, and the latter told me that she was “seeking a publisher”.

Graham, also the keynote speaker at the launch, praised Dingwall for “the real music in the text” of his collection A Window To Let The Light Out, stating that influences of reggae superstar Bob Marley were evident. Later, Dingwall told the audience that he studied Marley’s lyrics for both their structure and content.

Graham also spoke about Dingwall’s work “observing the conditions of women … navigating the world” and being used to “interrogate the systems that continue to oppress us”. These themes were apparent in a lot of the 10 poems that Dingwall read: like ‘Miss Edith’, a poem for his “proud”, “stoic” grandmother; ‘On The Corners of New Kingston’, his musings on the tribulations of a prostitute he saw naked one night on the median in Trafalgar Road; and ‘Land’, about the many uses of and contradictory attitudes towards land that people have in Jamaica.

Dingwall claimed that he initially did not like performing onstage and actually started his writing career as a songwriter. However, he has since performed in Barbados, St Lucia and the United Kingdom, as well as locally, and appeared to be enjoying himself as he chatted and read – often dramatically and/or with humour for the audience.

From his comments, the audience learned that his early appearances at the monthly Poetry Society of Jamaica sessions at the Edna Manley College were a tremendous help in honing his writing skills. There and at the university, he said, he found himself “in the company of people who loved literature and who helped to make the publication of this book possible”.

Three of his other memorable poems were ‘On Joy’, about the many things that bring him joy (stewed peas, birds, babies, being rocked in his mother’s arms, etc); ‘My Love is Like Water’, on the ebb and flow of a romantic relationship; and the title poem (which he wrote to remind himself of times when he had been happy and to remember to be grateful). He also said that he plans to start writing songs again.

March is also Movie Month for the department. Last Friday, Four Days in May: Kingston 2010, a documentary film about the infamous incursion into Tivoli Gardens by security forces, was screened in N1.