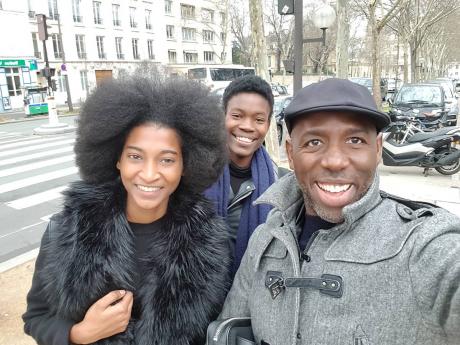 Sixteen-year-old Cum-berland High School stunner Breana Carson made more than a buzz at the recently concluded Paris Fashion Week. The teenager appeared as a world exclusive for the super prestigious Celine brand. This was fashion history, as was the first time a Jamaican model had been directly booked from Jamaica (by the model’s Jamaican agency) by the high-fashion brand.

The tall teen, who calls Portmore home, was scouted over two years ago by Saint International CEO Deiwght Peters, who told the teen on the spot that he would make her a star. But her dreams had to be delayed. She was 14 years old at the time. Carson could claim that it was divine motivation that took her to school that morning. Her parents had no money for bus fare or lunch, but she decided that she could not miss school that day and walked for almost an hour from her home in Gregory Park. Soon after scouting her Peters met with her father and explained the professional ambitions he had for his daughter, which he fully endorsed. A few short weeks later, in March 2017, she won the Fashion Face of the Caribbean competition from a competitive field of 50 finalists.

“Breana was easy to make a star, but I realised it would take a period of intensive training, building self-awareness and self-confidence, and tweaking her look,” Peters said of his latest protégé.

In the latter part of last year, the casting directors from Celine reached out to Saint to see its pool of new faces. After a casting in Kingston, Carson was one of two Saint faces who were shortlisted by the team. The other was Tash Ogeare, who, ironically, was Caron’s successor and winner of the 2018 Fashion Face of the Caribbean contest.

Fast-forward to March 1, 2019, and Carson has stamped her name into the fabulous annals of fashion as a world exclusive for the brand. This was a historic moment for the Jamaican model.

“It feels like a dream come true,” Carson said of her experience in Paris. “I love the entire team, and they took great care of me and the models.”

Her high-school principal, Darien Henry, was also beaming with pride. “The students and staff are very proud of Breana. She is very talented, and we are confident she will take the world by storm. She is from humble beginnings but is very assertive and focused on her education. We will continue to give her our wholehearted support,” he said. He also had high praises for the model powerhouse. “We thank Saint International and Deiwght Peters for bringing this opportunity; we are forever grateful,” he added.

It was a night of Jamaican fabulosity on the Celine runway in Paris when Carson was joined by her Saint sisters Christine Willis and Tash Ogeare in what Vogue scored highly on the top 12 shows of Paris Fashion Week. The show’s success was also validated by its enviable listing among Vogue’s Top 10 Most Viewed Collections of the Fall 2019 Season.

She had dreams of becoming an assistant secretary until the fateful, day she met Peters at her school who told her, “Dream bigger, dear Breana.”

The Jamaican agency has recorded a historic number of direct bookings from its operations for prestigious and coveted brands across the fashion world. Fresh from her Paris conquest, Carson will hit the runway as a special guest at the Fashion Face of the Caribbean 2019 final, which is set for the Courtleigh Auditorium on March 30.