'I am Buju's biggest fan' 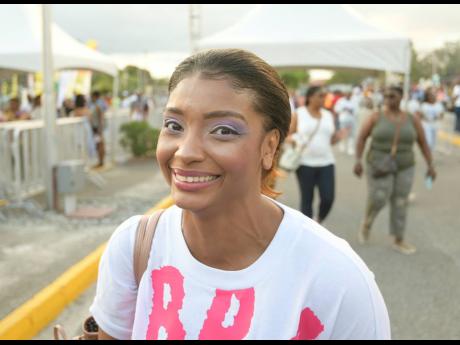 Gladstone Taylor
Kenisha 'Nancy' Williamson from Miami Florida sacrificed her VIP tickets to take her entire family to the concert. Williamson says she is Buju Banton's number one fan.

Keneisha 'Nancy' Williamson, says she is Buju Baton's biggest fan. Her love for the Gargamel runs so deep that she took a day off from work in January when tickets for the first show in Banton's Long Walk to Freedom tour went on sale. Knowing how difficult online purchases can be, Williamson said she sat in front of her computer all day until she was able to purchase her tickets.

Williamson, who was born in Jamaica, migrated to the United States as a child, and now lives in Bronx, New York. She arrived in the island Friday night.

Williamson told The Gleaner that she sacrificed being in the VIP section of the stadium so that she could share the moment with her entire family. She brought her sister, her cousin, her husband, her brother and her teenage son.

"This moment means so much to me that I didn't want to experience it alone. I didn't get my VIP tickets, just so that I could buy tickets for my family. I know that this moment is going to be something special, and I especially wanted my son to be here. This will be his first time seeing Buju perform, but he knows his music because he's cultured. He knows his roots and it was important to me that he has this experience."