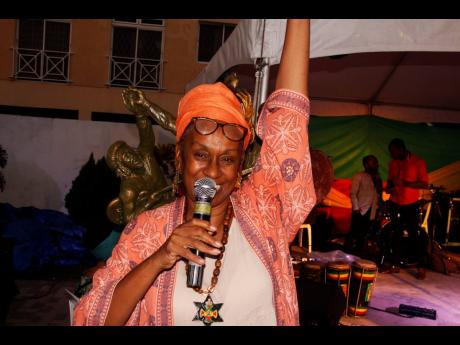 A life-size statue of the Wailers – Bunny Wailer, Bob Marley and Peter Tosh – which was commissioned by the Bunny Wailer Foundation, as a way of honouring the legacy of the iconic reggae group, is coming to life with the help of Cuban sculptor Albertico Lescay.

Maxine Stowe, manager of the only living Wailer, Bunny Wailer, told The Gleaner that whereas the three founding members of the Wailers have their legacies preserved as individuals, currently there is no physical representation of the Wailers as a group, and this needs to be addressed.

She noted: “Jah B is doing this to preserve the legacy. There is the Bob Marley Museum, the Peter Tosh Museum, but there is nothing that represents the Wailers as a group. When Jah B looks at the image being promoted in the public, he decided to set up a Wailers museum at his house, because their history deserves to be told.”

She also mentioned that at the Peter Tosh Museum, there is a picture of Peter Tosh, Bob Marley and Mick Jagger together. “But where is the one to represent the Wailers?” she asked.

Delving into history, she explained that a 1999 settlement agreement dictated who should lead out in preservation of the Wailers’ legacy, but she feels that this has been ignored. The case in question surrounded the licensing conflict over the Wailers’ iconic logo with the three raised fists, belonging to Marley, Tosh and Bunny Wailer. This was subsequently changed to the face of Bob Marley, which represented his solo career.

The maquette for the statue was made by Jamaican Paul Napier and there was an official launch last December. The next step is the making of the statue. Stowe, who recently returned from Cuba, says that while there, she met with representatives from the Cuban Institute of Music regarding collaborations, and she also had dialogue with sculptor Lescay, who has been commissioned to make the actual life-size statue. In Cuba, Lescay is most widely known for designing and helping build ‘El Titan de Bronce’ (The Bronze Titan) the mammoth 53-foot-high monument to the Cuban general Antonio Maceo Grajales.

“Lescay and his son, Albertico, who is a musician, work together and they are so excited to be a part of this project. In fact, they are talking about making a Wailers statue to be placed in Cuba,” Stowe disclosed, adding that there is a large community of Jamaican descendants in Santiago de Cuba, and they have retained their Jamaican heritage. “Santiago de Cuba is like Little Kingston,” she said

As it relates to support from the estates of Bob Marley and Bunny Wailer for this project, Stowe explained that whereas the Peter Tosh estate is on board, there has been no official word from the Marleys, one way or the other.

“There is a new manager at the Tosh estate and he has been quite receptive. He sees the importance of this project. After all, it is the Wailers catalogue that the bulk of the royalties are paid from, so Peter Tosh’s estate knows that preservation of the Wailers legacy is vital,” Stowe said.

With regards to the Marleys, she said that “they had reached out to the sculptor”, but there has been no discussions between them and Bunny Wailer. However, she noted that Bunny Wailer is a founding member of the group, and despite the fact that he left the Wailers in 1974, there is a lot of legacy to be preserved during his tenure, which officially started with the release of the group’s 1963 hit, Simmer Down.

“But, remember that they were rehearsing as a group for a year and a half prior to that. In fact, they started out as The Teenagers and afterwards they were anointed The Wailers,” she explained.

“People – and I’m not talking the Marleys – love to say that Bunny left the group. That may be so, but that doesn’t change the value of his contribution in any way. And, as a matter of fact, after Jah B left the group, both Peter and Bob worked on his Blackheart Man album, which was put out by Island Records, the same company that Bob and Peter were signed to. So that shows that there was still a lot of unity,” she said.